A Map of the Dolphin Mind

Take a tour of the animal kingdom’s second-most remarkable brain. 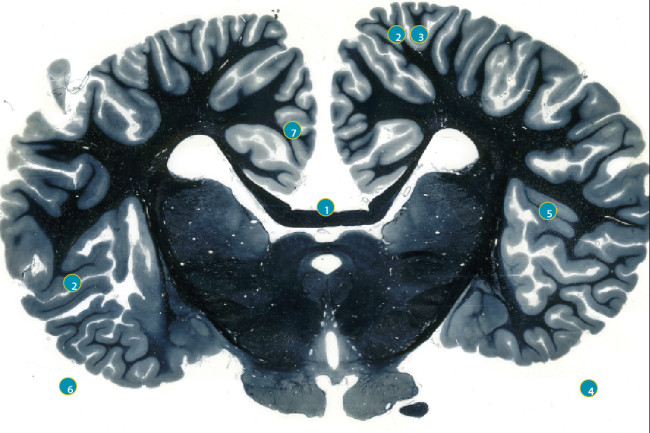 Reproduced with persmission from http://www.brains.rad.msu.edu and http://brainmuseum.org, supported by the National Science Foundation

Fifteen years ago, the dolphin brain got no respect. Despite dolphins’ obvious intelligence and social aptitude, anatomical studies of their gray matter revealed an indistinct muddle of neurons, nothing like the specialized, refined structures found in human brains. The animals lack a layer of neurons considered essential to information processing, and many parts of their brains—especially the frontal lobe, the site of higher cognition in people—looked underdeveloped.

More recent studies, including three-dimensional magnetic resonance imaging that captures the whole brain, as well as investigations at the neuronal level, have led to a wholesale reassessment of Flipper. Dolphin brains are not simpler than ours, it now seems; they are just as complex, but in different ways. Since the human and dolphin lineages diverged around 95 million years ago, our two species have independently evolved some of the same basic mental traits: high intelligence, self-awareness, and sophisticated social skills.

Size Matters: Dolphins do not have the largest brains in the sea (sperm whales hold the record), but only humans have a higher brain-to-body weight ratio. And bigger does not always equal better. The brain eats up so much energy that the only reason to have a sizable one is that it provides some survival benefit, such as superior cognition.

Half Awake: Studies of neural activity show that only half of a dolphin’s brain sleeps at a time, keeping the other half active to prevent drowning. Computer models suggest that every five minutes or so, a structure at the base of the dolphin brain on one side sends an inhibitory signal to its twin, switching the opposing hemisphere off.

Split Personality (1): Because of dolphins’ split-brain sleeping pattern, each brain hemisphere independently controls crucial functions such as swimming and listening for predators. Without much cross-traffic to carry, the dolphin’s corpus callosum—the fibrous highway connecting the two hemispheres—has only a quarter the number of fibers of a human’s.

Self-Recognition (2): Dolphins are among the few mammals able to recognize themselves in a mirror. In primates, this ability depends on the brain’s frontal cortex, but the small size of the dolphin frontal cortex leads researchers to believe that the cetaceans rely on their hyperdeveloped temporal and parietal areas, just behind the frontal lobe.

Hear Me (3): Echolocation—biological sonar—appeared in dolphin ancestors some 30 million years ago. The dolphin brain has an expanded auditory cortex to process complex whistles and clicks. It also has a large cerebellum, a brain region that normally controls movement and balance but that may also analyze sounds in this case. The animals can begin transmitting a new sonic signal in search of food or friends just 20 milliseconds after the previous one bounces back.

No Nose (4): As auditory regions of the brain ballooned during dolphin evolution, other areas shrank. Dolphins have little need for a sense of smell. Their vestigial olfactory bulb disappears just a few days after birth.

Smart Cells (5): Dolphins are one of the few species with spindle neurons, cells that act as bridges between brain areas devoted to high-level activities like cognition and self-awareness. Other large, intelligent animals (including humans and elephants) also have these neurons, but researchers do not know exactly what they do.

Wise and Wrinkled (6): A lumpy, foldy brain indicates intelligence. The greater the folding, the larger the brain’s surface area and the more specialized functions it can support. If unfolded, the surface of a bottlenose dolphin’s brain would be about the size of six magazine pages. A human’s, slightly smaller, would unfold to only about four pages.

How I Know You (7): Compared with humans, dolphins have an extra lobe in the emotion-managing limbic system of the brain. This “paralimbic” region may help with all the social information that dolphins process: They form strong social alliances and may refer to each other by signature whistles.