A Lot Of Dinosaurs Couldn't Stick Out Their Tongues 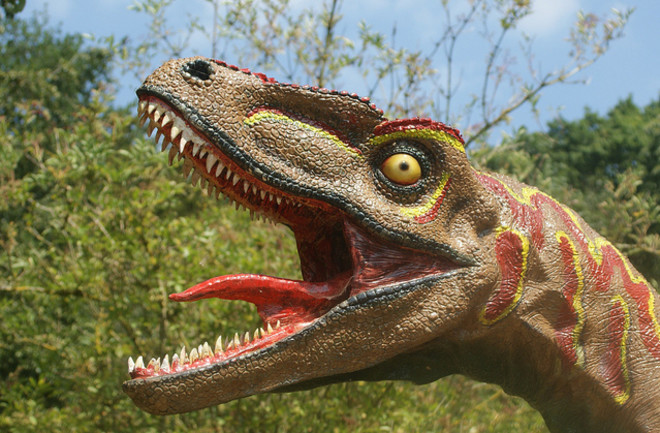 Here's a big Nope-asaurus for ya: Reconstructions of most dinosaurs with their tongues out and wriggling like this guy's are wrong, according to a new study. (Credit: Spencer Wright) When it comes to fleshing out dinosaurs, so to speak, based on their nearest living relatives, paleontologists can look to birds or the crocodilians. But a new study says depicting most dinosaur tongues like those of birds with particularly mobile mouthpieces, well, that's just a crock. Tongues aren't much more than a hunk of mouth muscle without the hyoid apparatus, a group of bones that varies significantly between species and provides your mouthmeat with both an anchor and a kind of scaffolding that determines its position and range of motion. We puny humans are left with just a single hyoid bone, but many other animals have elaborate, highly specialized hyoid structures that adapted to exploit specific environments or diets. Take hummingbirds, for example. Their nectar-lapping tongues are spectacularly long and unroll from the bird's mouth to get the sweet stuff.

Hummingbirds evolved long, highly mobile tongues to feed on nectar. (Credit Kpts44/Wikimedia Commons) Then there are the woodpeckers: Most of them evolved long, often barbed tongues to probe small areas and then spear or rake in the insects they call dinner.

Illustration of a woodpecker tongue circa 1880. For real. (Credit: Popular Science Monthly Volume 16/Wikimedia Commons)Speaking in Tongues Woodpeckers and hummingbirds are, like all birds, the descendants of one dinosaur lineage. Paleontologists often look to birds for clues on how their extinct ancestors actually lived, and tongues are no exception. Many dinosaurs are reconstructed, by serious scientists or by Hollywood, with waggling, wriggling, highly mobile tongues. For many dinosaurs, however, that reconstruction appears to be wrong. Instead, the terrestrial, meat-eating dinosaurs appear to have had hyoid structures closer to their other living kin, the crocodilians, which means their tongues stayed in their mouths, firmly fixed to the floor. (Nitpicky note: unlike birds, which descended from dinosaurs, crocs are the living members of Pseudosuchia, a sister lineage of Dinosauria that split off on its own branch of the archosaur family tree more than 250 million years ago, before dinosaurs were around.) (Uber-nitpicky note: Some folks still advocate for the term Crurotarsi rather than Pseudosuchia to describe that side of the archosaur family tree in particular. The salient point is that, if we think of birds as the children of dinosaurs, living crocodilians are the dinosaurs' nieces and nephews.) Researchers compared hundreds of fossilized hyoid bones of dinosaurs with hyoid structures of living animals, including birds and crocodilians. The analysis also looked at the hyoid fossils of early archosaurs and of pterosaurs which, like the crocodilians, are on a different branch of Archosauria than dinos.

The authors behind today's study compared the tongues and hyoid bones of living animals most closely related to dinosaurs, birds and crocodilians, as well as more distantly related reptile kin. (Credit: Li et al. 2018) The researchers did find evidence of more mobile, specialized tongues in the most bird-like of dinosaurs as well as the plant-eating ornithischians. Pterosaurs were also more likely to have tongues and hyoid structures that had evolved away from the standard broad, fleshy, fixed tongues found in the earliest archosaurs and retained by the crocodilians. The animals that most people think of when they hear the word "dinosaur" (namely, T. rex and other toothy theropods) appear to have stuck with that same early archosaur standard. Interestingly, based on the animals that did evolve more specialized and mobile tongues, the researchers believe the adaptations were linked to changes in diet and locomotion. Hypercarnivorous animals, like the crocs and theropods, seemed to do just fine with simple hyoid structures. But animals that were eating vegetation or insects typically had more specialized hyoid structures (and, by extension, no pun intended, likely more complex tongues). Animals that took to the air, pterosaurs and birds, also were more likely to have highly adapted hyoid structures, possibly because the act of nabbing and manipulating prey in midair required more mobile mouthmeat. Study co-author Julia Clark, by the way, previously made news for her work on understanding dinosaur vocalizations based on the animals' anatomy (hint: crocs figure into her conclusions there as well). Today's study appears in PLOS ONE.

The hyoid bones (called out with arrows in images B and D) have been preserved in dinosaur fossils from Northeast China, allowing researchers to determine how the animals' tongues were positioned and their likely range of movement. (Credit: Li et al. 2018)