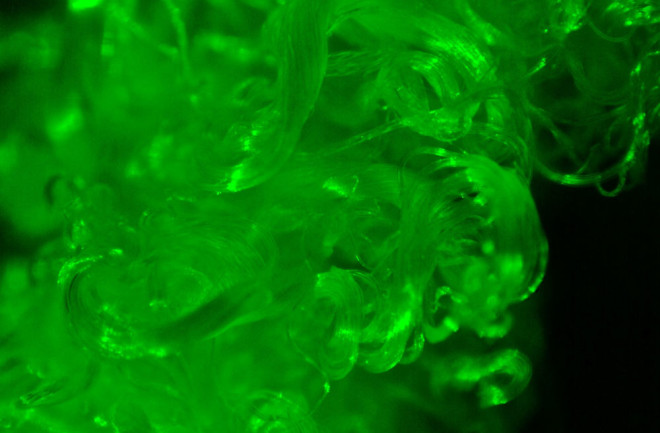 A microscopic image of glowing cotton fibers. (Credit: Filipe Natalio) Everything is getting “smarter” these days: automobiles, refrigerators, garage door openers…trashcans? Even the shirt on your back is wising up and feasting on the data you generate with every step. The emerging e-textiles market promises threads that communicate, conduct energy, control body temperature and shapeshift. There are smart yoga pants, for example, that feature built in haptic vibrations to guide you into the perfect downward dog. The Supa sports bra links to an app and will provide feedback about your workout. And Apple has several patents on clothing that would double as a remote control for all your connected devices—who needs a watch? But being connected to the web from head to toe has its drawbacks: Many of these smart fibers are simply conventional strings coated in some kind of material. Or, tiny wires and materials are sewn into the garment along with plain old cotton. But coatings can irritate the skin, and wires break down with use. If only we could go to the source and grow superconductive, magnetic or glow-in-the-dark cotton from the ground. The threads themselves would have desired qualities from the start. Well, that’s exactly what Filipe Natalio and his team are trying to accomplish. By exploiting the natural engineering of cotton plants, Natalio introduced synthesized sugar molecules to growing cotton ovules and yielded fibers with fluorescent and magnetic properties. They published their findings Thursday in the journal Science.

The Touch, The Glow, of Cotton

Rather than using genetic modifications, Natalio wanted to harness the engineering expertise of nature. So they looked for ways enhance cotton plants, without changing anything they wouldn’t already do naturally. After carefully studying the plant’s biology, they found a pathway to success. The key realization was that glucose produced through the process of photosynthesis is channeled through a host of tissues in the cotton plant, eventually making it to the epidermal cells and ultimately to the fuzzy fibers we pick for clothing. Sugar therefore could act as a kind of vehicle for the changes they wanted to make. “Genetic engineering is powerful, and I do not doubt it, but nature itself has a lot to offer,” Natalio wrote in an email to Discover. With this knowledge, Natalio and company synthesized sugar molecules that carried fluorescent or magnetic properties. Then, they bathed cotton ovules—the part of the plant that later becomes the seed—in a medium that contained their sugar molecules. Sure enough, the desired properties were incorporated into the raw fibers.

Growing enhanced cotton threads in vitro isn’t going to be practical at an industrial scale, but Natalio envisions a day when synthesized sugar molecules can be added to the water that’s sprinkled on a crop. However, coaxing the entire plant to soak up the modified sugars from the soil, and get them to the seed, is still a process that needs further study. But Natalio’s work is one small step toward a new era of “material farming.” “One of the properties we are exploring is the use of cotton fibers as biological data storage devices,” he said. “We hope to someday record 0’s and 1’s in a single fiber and record your personal data, for example.” If they can refine the process and make it work from soil to seed, Natalio believes the technique could work on a host of other important crops like bamboo, silk, flax and more. Producing bamboo that conducts electricity would be as simple as adding water. If you could add one capability to a cotton crop, what would it be? Tell us your vision for material farming in the comments.