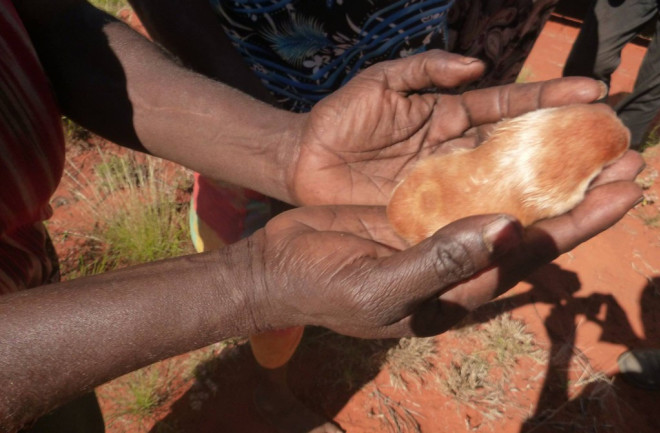 Take a good look, because once this squirming lump of golden fur dives back into the ground, you probably won’t see it again for a long time.

The adorable creature is a northern marsupial mole, Notoryctes caurinus, known more commonly by its aboriginal name, karrkaratul. It was found by rangers affiliated with the Tjamu Tjamu Aboriginal Corporation during an expedition to the outback last week, after it scurried across the road in front of their vehicle. The crew stopped for a quick photo shoot before returning it to its subterranean habitat. Some of the younger rangers had never even seen the creature before.

Karrkaratul are so rare that fewer than ten are seen a decade, as National Geographic reports. They are thought to be endangered, although so little is known about them that their status is largely a mystery. They are descended from marsupials, and actually have no common ancestors with other moles, making them a prime example of convergent evolution. Their sleek fur and streamlined bodies allow them to move quickly through earth, a job made easier with two shovel-like paws and a hardened forehead that acts as a kind of battering ram. The blind marsupials dine mostly on insects and larvae, and can live their whole lives underground, which explains why they are so rarely spotted on the surface.

As a 2000 paper published in the Australian Journal of Zoology explains, these moles can lower their body temperatures significantly, similar to a reptile, in order to match the heat of the sand and conserve energy. Their metabolic rate is so low, in fact, that they don’t even need to dig out a tunnel, instead surviving on the wisps of air that seep in through tiny gaps in the sand.