The fatter the bear, the better the odds at survival. 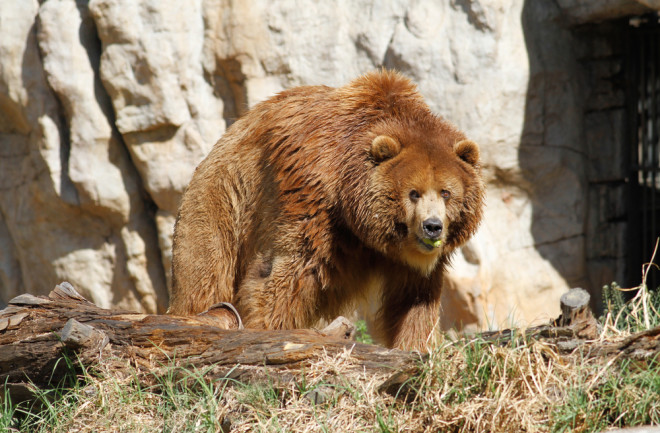 So many reasons to love fall — crisp air, colorful leaves, sweater weather and of course, Fat Bear Week! Each fall, the competition showcases chunky brown bears that are packing on pounds to prepare for winter hibernation. Brooks River in Katmai National Park, Alaska houses a large population of these hefty bears where the competition takes place. Votes are cast online for the fattest bear in a March Madness-style bracket and the audience helps choose the ultimate victor.

480 Otis was crowned this year's chunky champion on Tuesday, amongst the 12 contestants who worked hard to chow down before winter. The 25-year-old winner, who stands at around 1,000 pounds or 454 kilograms, took home the title for the fourth time since the start of the competition in 2014. Typically, adult male brown bears can weigh up to 1,200 pounds or 544 kilograms.

Fat Bear Week remains a fall tradition to spread awareness of the brown bears' experiences as they fight for food and survival before Alaska's harsh cold season arrives.

Fun as the contest is for humans, for the ursine participants of Fat Bear Week, gaining weight is crucial for survival. In order to prepare for hibernation, these omnivorous giants attempt to increase their body mass by eating and drinking nonstop. During the harsh Alaskan winter, which can last five to eight months, the temperatures are frigid and food is scarce. The bears, of course, lie low in their dens and rely on their own body fat for survival. Gaining weight can also help bears secure mating opportunities and allow the females to support the birth and growth of cubs.

When it comes to their diet, these hefty animals will literally eat just about anything and everything that they can scarf down in the fall months. In order to fatten up, brown bears can eat up to 90 pounds of food each day! Though their primary nourishment comes from nuts, berries, fruits and leaves, bears will also dine on other animals including mammals, reptiles and fish. For the brown bears in Katmai National Park, which is home to more bears than people, sustenance often includes salmon. Mike Fitz, a former ranger at Katmai and the creator of Fat Bear Week, explains that many of the Fat Bear Week contestants feed on the available salmon at Brooks River between June and October. "Fat Bear Week is an opportunity to think more about a healthy and productive ecosystem that supports the brown bears," says Fitz.

The 2021 Fat Bear Week winner, 480 Otis, a medium-large adult male, was crowned as champion despite a tough fight against his competitors. Typically, Fat Bear Week is a single-elimination online tournament in which 12 Alaskan brown bears in Brooks River are chosen to compete. Because numerous brown bears are present in the park, narrowing it down to just 12 contestants can be tough. According to Fitz, the bears are typically chosen by the park rangers, based on a variety of factors such as their time of arrival at Brooks River. An early summer arrival at the river ensures that the bear is photographed before and after their weight gain. A compelling storyline is also a driving factor when choosing a contestant. The audience loves to see a veteran bear with skill and resilience, like Otis, competing year after year.

After the bears are picked, the audience keeps voting for their favorite until one bear is left standing. The competition is subjective, says Fitz, and the audience is encouraged to consider many factors when picking a winner, such as how much weight the bear has gained over the last few months and their salmon catch rate. Other factors include sympathizing with the health challenges of older bears or the difficulty of mother bears to gain weight as they cope with the added challenge of fending for their young.

Despite his older age, 480 Otis won the hearts of the crowd yet again. The bear, who also won the fatty title in 2014, 2016 and 2017, was first spotted as a cub in Brooks River in 2001. According to the bear's bio, Otis competed with younger members while also facing numerous challenges. For example, he was missing his two canine teeth, a big disadvantage, as a bear's teeth are crucial for slicing through food. Otis was spotted in the river later than usual this year, but still had a high salmon catch rate.

151 Walker, a large assertive adult male bear, faced off against Ottis in the final round. Walker's bio explains his increased body size and assertive disposition. Yet, Otis took home the prize with 51,230 votes, beating Walker who had 44,834 votes. Despite all odds, his patience and wisdom won Otis the audience's love and title as 2021's Fat Bear Week winner.