A Bridge Too Far

Two miles long, with towers nearly as tall as those of the World Trade Center, the Messina Bridge challenges science's ability to design around wind, earthquakes, and environmentalists. 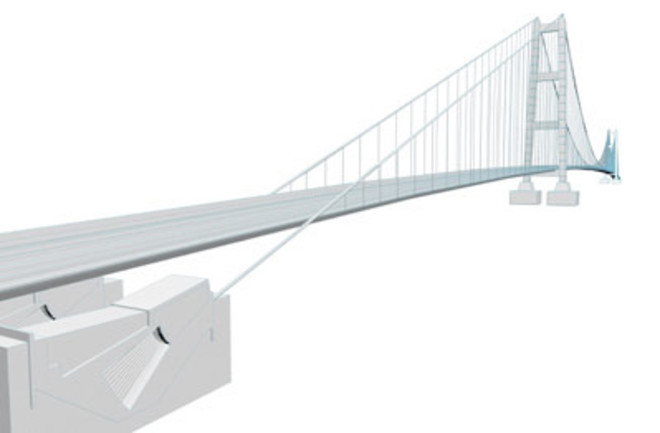 The Brooklyn Bridge was just a beginning. In the 121 years since John Augustus Roebling’s masterpiece of steel and stone first spanned the East River, engineers have reinvented the suspension bridge and its constituent parts. Over the next 20 years, a new generation of designs will remake the world’s geography—yoking continents, binding archipelagoes, and rising above the roughest waters.

Last year, the Italian government approved a controversial $5 billion project to build a bridge across the Strait of Messina, connecting the island of Sicily to Calabria in mainland Italy. The 2.05-mile-long Messina Bridge will be almost twice the length of the current record holder, the 1.24-mile Akashi Kaikyo Bridge in Japan. It will reduce commuting times across the strait from more than an hour to minutes and transform the economy of southern Italy, long the country’s poorest region. Yet the strait should prove daunting to even the most daring engineer. In Homer’s Odyssey, its rocks and whirlpools were symbolized by the monsters Scylla and Charybdis, and it cost Odysseus six of his crew. Then as now, it was among the most seismically active regions in Europe: In 1908 an earthquake measuring between 7.1 and 7.3 on the Richter scale destroyed the city of Messina, killing as many as 100,000 people.

Already, the bridge’s novel design, with a deck shaped like an airplane wing, is being used as a template for future bridges across the Strait of Gibraltar and the Bering Strait. The Messina Bridge is the biggest breakthrough in design since the Golden Gate, says structural aerodynamics consultant Giorgio Diana, a professor at Milan Polytechnic Institute. “It’s like trains switching from the coal engine to an electrical one.”

Cables: The two pairs of suspension cables that hold up the deck will be the heaviest component of the bridge. Four feet thick and 3.3 miles long, they will be braided out of more than 44,000 wires. The cables will help make the bridge both level and stable enough to allow a high-speed train to cross it.

Anchorages: The Strait of Messina is more than 600 feet deep, with an unusually hard seafloor, so building platforms in the sea is impractical. The entire span must be suspended between towers on either shore, each nearly as tall as those of the former World Trade Center. The weight of the deck will be borne by two pairs of massive anchorages containing nearly 740,000 cubic yards of concrete and steel. On the steep Calabrian side, the anchorages will be embedded 164 feet into the ground to keep them from crumbling during an earthquake. The tall but flexible towers and relatively flexible deck should be able to withstand an earthquake up to 7.5 on the Richter scale—larger than the one that destroyed the city of Messina nearly a century ago.

Deck: Traditional suspension bridges have thick decks, strengthened and stiffened by a lattice of girders. The Messina’s deck is held up instead by three wedge-shaped beams, each less than 10 feet deep, with crossbeams every 100 feet. The structure seems flimsy—it will weigh no more than the deck of Japan’s Akashi Kaikyo Bridge, which is four-fifths of a mile shorter. But the Messina’s more slender support beams (in yellow) should deflect the wind (blue arrows) rather than resist it, channeling it up through open grills between beams. Engineers expect the bridge to withstand winds up to 195 miles per hour—65 mph stronger than any winds liable to buffet the area in the next 2,000 years.

Ecology: Environmentalists have vowed to halt the Messina project. They say that the strait is both a major flyway for migrating birds—more than 300 species use it each year, 181 of them threatened or endangered—and an important migratory route for bluefin tuna. Birds weakened by their long flights could crash into the towers. Shadows and lights from the bridge could disrupt populations of dolphins, tuna, and deep-water fish. Preliminary studies commissioned by the government suggest that such concerns are overblown and that the pollution from existing ferries could well be a greater environmental threat.

Wind: When a strong, steady wind strikes a bridge, its deck can begin to twist and vibrate like a violin string, undulating at different resonant frequencies. If two or more of the vibrations fall into sync, they can amplify one another until the bridge is shaken to pieces. That happened in 1940 near Seattle, when a mere 42-mph wind took down the Tacoma Narrows Bridge, known as Galloping Gertie. The longer the bridge, the more susceptible it is to wind. To streamline their designs, the Messina engineers studied computerized records of local winds over the past 13 years (the top speed was around 90 mph). They then festooned models of the bridge with electronic sensors, placed them on a turntable in a wind tunnel, and subjected them to winds of varying velocities.