A Brewery in Peru Ran For Centuries, Then Burned After One Epic Ancient Party 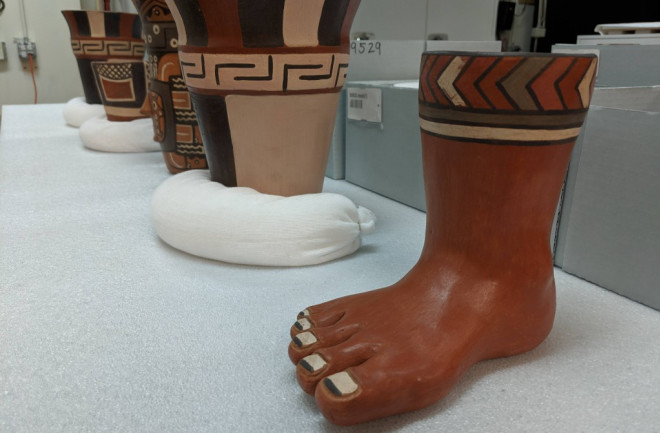 Replica Wari clay vessels for brewing and drinking are now in collections at the Field Museum. New research has revealed the recipe for these ceramics — and the recipe for the chicha molle brews that they held. (Credit: Anna Funk)

Five hundred years before the Incan empire reached its height in South America, a different civilization reigned: the Wari. One of the Wari’s claims to fame is that they were early brewers of a drink called chicha. The fermented beverage was made by the Inca after them and can still found in Peru today. Many variations of the drink have been common across Central and South America for centuries.

New evidence, recently published in the journal Sustainability, suggests this beer relative may have played a role in keeping Wari civilization together. Not only that, but researchers started to figure out their ancient beer recipe — and they’ve re-created it for us to taste.

You’ve probably heard about past civilizations like the Maya, the Inca, and the Aztecs. But the ancient Wari are starting to make their way into public knowledge, too. They reigned for 500 years in an area almost the size of a U.S. coast — from San Diego to Portland or New York City to Jacksonville — in what is now Peru.

Part of the reason they’ve been relatively unknown is because their society was already a thing of the past when the Spanish arrived in the 1500s and met the thriving Inca. The first hints of Wari civilization weren’t uncovered until the turn of the 20th century, and serious excavations only started in the past few decades. Since no written records from the Wari themselves have been found, nearly everything known about them today is from archaeological finds.

But about 15 years ago, Ryan Williams, an archaeologist at the Field Museum in Chicago, and others uncovered one of the oldest large-scale breweries in South America at the Wari site of Cerro Baúl. Radiocarbon dates suggest this brewery had been in use for hundreds of years, possibly spanning the bulk of the empire's existence, until it closed dramatically in about 1050 AD. At the last party this brewery ever saw, they literally burned it all down.

It took years for the archaeologists to get from digging up artifacts to sipping a Wari Ale in Chicago, but they did.

Their first step was to excavate the Cerro Baúl brewery itself. The site has different rooms that appear to have housed different stages of the brewing process: for instance grinding corn, boiling mash or fermenting and storing the chicha. And it’s huge: the 5,000 square foot facility has at least eight hearths, and the largest vat they found might have alone held more than 250 gallons of ale.

They analyzed the composition of the clay used to make the drinking and brewing vessels at the site. They found that the clay was chemically distinct from other Wari ceramics from the region. It instead matched a clay deposit close to the brewery that they'd identified a few years prior.

Next up, the researchers called in an indigenous specialist to take their clay study a step further. Ceramicist Miguel Moreno, from a few hours south of the site in the Chilean town of Arica, does potting in indigenous traditions using local clays. He examined the artifacts and the clay, and figured out the right clay “recipe” that could have made the vessels. He then made highly accurate replicas of the artifacts, some of which are now in Chicago at the Field Museum.

The researchers think the Wari's designs on these replica vessels were themselves replicas of what was popular at the Wari capital. (Credit: Anna Funk/Discover magazine)

The team then built on archaeological findings and current indigenous knowledge to narrow down possible chicha recipes the Wari may have used at this brewery.

They settled on two main ingredients: corn and berries from the Peruvian pepper tree, Schinus molle. There was enough residue on the 1,000-year-old artifacts to run a biomolecular analysis to help identify some of the compounds. But they needed something to compare the results to.

Donna Nash, an anthropologist at University of North Carolina at Greensboro, and Williams’ collaborator (and spouse), led an effort to brew a few chicha test batches. With the help of indigenous Peruvian women, and the new clay vessels made by Moreno, the all-female team worked to accurately re-create three Wari-style chichas using corn, pepper berries and both together. Archeological evidence from the site suggests Wari chicha brewers were all women, as well.

The archaeologists worked with Peruvian brewers to re-create chicha recipes. This allowed them to figure out what had been brewed at Cerro Baúl 1000 years ago. (Credit: The Field Museum)

The team could then compare the results of the biomolecular analysis of the artifacts to the residue left on the modern vessels by the different chicha recipes. Because Peruvian pepper berries in particular have a unique chemical signature, they could confirm that the ancient Wari used them in their brews.

Sharing Chicha With The Masses

The scientists didn’t stop there. The Field Museum had already partnered with Off Color Brewing in Chicago to make a dino-themed brew called Tooth and Claw. And when the Field Museum’s marketing team got wind of the Wari research, they wondered if Off Color might be interested in making a chicha, too.

There were a few roadblocks. The Wari recipe makes a brew that only keeps for five days. That’s slightly problematic in the modern beverage industry. Plus, to legally call a drink a “beer,” certain recipe standards have to be met — fermented corn and pepper berries don’t quite cut it. But the group persevered.

Instead of replicating the exact recipe, they decided, they’d just work to replicate the flavor in the form of a modern ale. Off Color obtained flavor-packing ingredients from the source: purple maize and pink peppercorns from Peru. The brewers went through multiple iterations with the archaeologists until they got the taste just right. The beer first came out in 2016 and was so popular Off Color is re-releasing it this June.

Besides putting Peruvian peppercorns on the map as a tasty craft beer ingredient, the archaeological finds at the brewery site have added some solid insights about the Wari people.

The pink peppercorn berries of the the Peruvian Schinus molle tree, which the Wari people used to brew chica. (Credit: ChWeiss/shutterstock)

They found that the clays for the pots and the ingredients for the brews were all locally sourced from around the brewery. But the chicha molle recipe itself, the recipe of clay and temper to make the vessels, and even some of the designs on the vessels actually mimic those found at other Wari sites — specifically the capital.

“So it was almost sort of like a franchise, I guess you could call it,” explains Williams, “where all of the ideas are given to you, but you’re locally sourcing and locally harvesting the ingredients for the beer.”

Because of the immense size of the vessels and the fact that chicha molle doesn’t keep long enough to store or transport, the archaeologists conclude that it would have likely been consumed at festivals. Plus, pepper berries are fairly drought resistant, so the chicha molle would have been fairly reliable through times of plenty as well as scarcity.

“That’s a resilient strategy for maintaining a brewery production over 400 years,” says Williams.

The brewery site was found littered with drinking vessels with exotic origins, some not even Wari but from the neighboring society of Tiwanaku. This likely means people traveled from all around to join together for these festivals, which were probably important both economically and politically to the Wari.

“When they were creating these festivals about becoming one with the Wari, you had to drink pepper berry beer which was the Wari beer,” explains Williams. “So it’s about branding a little bit, too.”

Then, after the brewery had run for hundreds of years, it hosted one final blowout bash.

The artifacts at the site, the researchers believe, are a snapshot of what it looked like during its final hours. Based on the positions of the artifacts, as well as ash and other sediments, it appears that this last festival ended with the Wari intentionally burning down the brewery.

Festival-goers smashed their cups onto the smoldering ashes; the fermentation jars were toppled, the pieces strewn about the brewery; and seven necklaces of shell and semi-precious stones were ceremoniously laid on the ruins. The whole thing was covered with sediment.

Why they did this is unclear. But one thing’s for sure: It was a clear signal that the brewery was now closed.

The Field Museum helped supply Discover with a six-pack of Off Color’s Wari Ale. And, for my personal tastes, the pepper-berry-chicha mimic is delicious. It’s a little sour but doesn’t make you pucker; a little fruity but not too sweet. It’s light and refreshing, and a fabulous shade of purple.

Though I’m not running any empires, I gathered friends together to taste the brew. Luckily, we didn't burn anything down — especially not the brewery — after we were done partying. Our neighborhood will live to see the next brew, slightly more united than before.