A Bone to Pick About Philistines 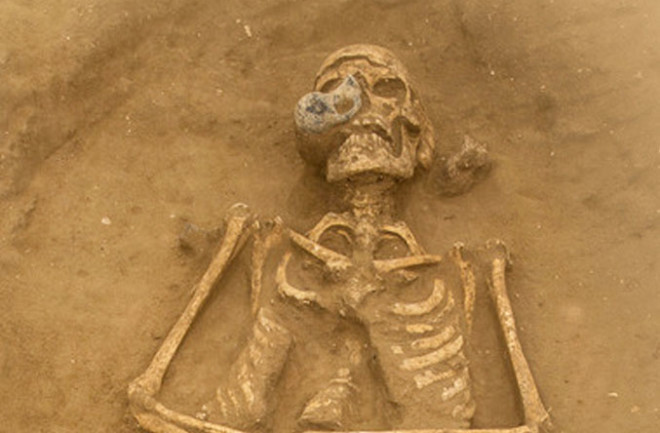 Philistine history was written by their rivals, and unfortunately for them, that text became a best-seller: the Bible. According to the Old Testament, Philistines were a constant threat, producing infamous villains like the temptress Delilah and giant Goliath. Their bad reputation persists even today: Their name is shorthand for anyone averse to culture and learning.

“But the archaeology has shown them to be more than that,” says Harvard archaeologist Adam Aja, assistant director of excavations at Tel Ashkelon, a major Philistine port city in southern Israel.

Philistines left no written records, but over the years archaeologists have unearthed buildings and artifacts that show Philistines were cosmopolitan. Scholars believe they migrated from the Aegean around 1200 B.C. to the Levant where, for centuries, their mercantile culture thrived — until their cities were demolished by Babylonians around 600 B.C.

“Archaeologists have done an excellent job constructing a plausible picture of who these Iron Age people were just based on the scraps we’ve had available to us,” Aja says.

But to confirm the origins and fates of Philistines, archaeologists needed more than scraps; they needed Philistine bones.

They finally got them. In July, researchers announced that they had found over 210 skeletons from the first Philistine cemetery ever discovered, just outside the walls of Tel Ashkelon.

“Seeing the Philistines face to face ... allows us to proceed for the first time from a really solid foundation,” says Daniel Master, Ashkelon co-director and Wheaton College archaeologist.

Master and Aja were tipped off about the cemetery in 2013, when a retired Israeli surveyor insisted he’d found human bones and pottery just outside Ashkelon’s gates during a construction project decades ago. Aja probed the grounds with a backhoe until he struck bone, locating the long-lost burial grounds.

Since then, the Ashkelon team has been exhuming and analyzing the skeletons of Philistine men and women, from infancy to old age. Some individuals were resting alone on their backs or sides; others were jumbled in groups or cremated. The modest grave goods include tiny jugs, bracelets and weapons.

Digging at Ashkelon ended in summer, but research continues in the laboratory. At press time, the team planned to present preliminary results in November. Aja hopes ancient DNA and radiocarbon analyses, currently underway, will resolve the biggest mysteries of the Philistines: Where did they come from and where did they go? Were they wiped out by their enemies or merely absorbed by them?

“Authors are not always kind to their enemies in texts,” he says. “We want to try to set the record straight."