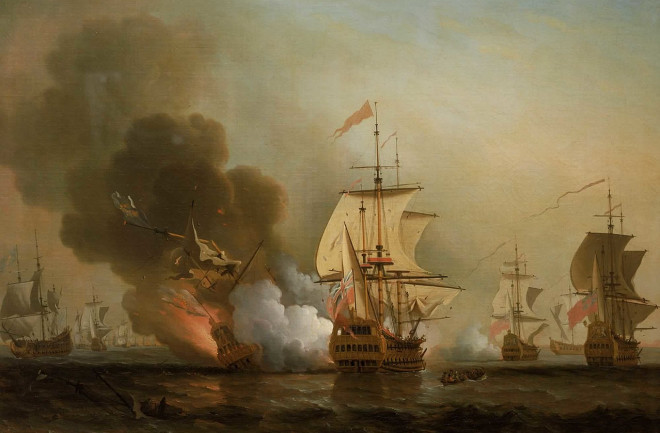 The Woods Hole Oceanographic Institution (WHOI) recently announced new details of the discovery of the San José — a Spanish galleon carrying a treasure of gold, silver and emeralds that went down in the War of Spanish Succession in 1708. You could quite literally say that its cargo is worth a boat-load — valued in the billions of dollars today.

Gold Under Those Waves

The sunken ship was found off the coast of Colombia in 2015, but since disclosure permission was needed from the Colombian government and others, details of discovery were kept under wraps until now.

We’ve since learned that a crew of international engineers and scientists aboard a Colombian Navy research ship discovered the 62-gun, three-masted ship at a depth of about 2,000 feet. The team called upon REMUS 6000, an autonomous underwater vessel provided by the WHOI, to take a closer look at the wreck, which was partially covered in sediment. Descending to just 30 feet above San José, REMUS was able to photograph the intricate dolphins engraved in its bronze cannons, a key detail that helped identify the ship.

Dubbed the “Holy Grail of Shipwrecks,” San José served as a Spanish treasure fleet during the War of Spanish Succession — a conflict that ensued when Charles II, Spain’s childless ruler, left the Spanish throne to King Louis XIV of France’s grandson. Surrounding countries, like England, the Netherlands and Portugal declared war to correct what they saw as an imbalance of power.

During the war, the San Jose hauled valuable treasures from South America back to the Spanish king, who used the pricey cargo to fund his war efforts. Seven years into the war, San José and its onboard riches were traveling from Panama to Colombia when it ran into a fleet of rival British ships, who began firing upon the galleon. The fusillade caused the gunpowder aboard the San José to ignite, turning the ship, and its precious cargo, into a fiery ruin.

The ship’s disappearance had stumped the public for decades, including governments and treasure hunters who put great efforts into finding the shipwreck, only to turn up empty-handed.

Now that the San José has been located, historians can sift through its artifacts to get a feel for Europe’s early 18th century culture, economy and political and social trends. The Colombian government plans to showcase the ship’s treasures, including its cannons and ceramics, in a public museum dedicated to the sunken vessel.

It may have taken over three centuries to track down, but with collaborative efforts and some serious dedication, the treasure hunt is finally over.