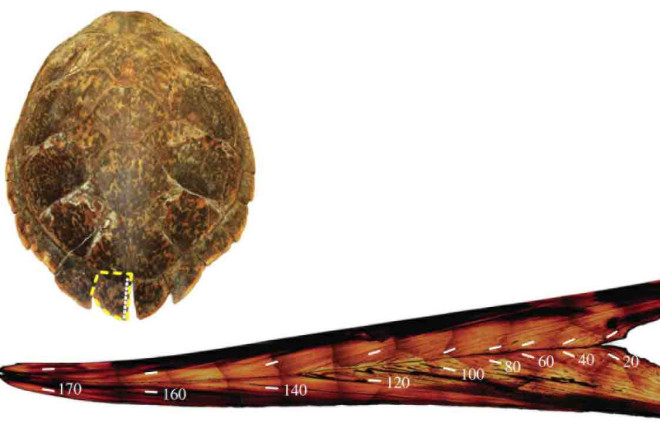 The number of growth lines, tallied by white lines below, can reveal the age and diet changes of hawksbill turtles. | Kyle van Houten et al., Time in Tortoiseshell, Proceedings of the Royal Society B, 283: 20152220, Jan 13, 2016

Sign up for our email newsletter for the latest science news
A hawksbill sea turtle. | Claudio Contreras/Naturepl.com

Buff and mahogany swirls and starbursts form distinctive patterns on the shells of hawksbill sea turtles, once common in tropical oceans worldwide. But their numbers dropped because demand for jewelry, hairpieces and other ornaments crafted from their shells made them one of the most widely trafficked species. Now, those same shells can provide critical information about their dwindling populations.

A team of scientists in Hawaii has developed a way to chart the chronology of a turtle’s life using the growth lines in its shell, much like the life span of a giant sequoia might be measured in tree rings.

The number of growth lines, tallied by white lines below, can reveal the age and diet changes of hawksbill turtles. | Kyle van Houten et al., Time in Tortoiseshell, Proceedings of the Royal Society B, 283: 20152220, Jan 13, 2016

The researchers turned to bomb radiocarbon dating, which establishes an age based on levels of isotopes associated with thermonuclear testing from the mid-20th century. The team applied the technique to cross sections from 14 mature hawksbill shells provided by museums and archives, as well as law enforcement agencies that had confiscated them from traffickers. As the turtles grew, those isotopes left deposits in the shells’ thick keratin, the same stuff our fingernails are made of. The deposits not only revealed each turtle’s life span, but a chemical analysis also shed light on changes in the animal’s diet that reflect increasing habitat pressures.

Next, researchers will apply the technique to hawskbill populations outside of Hawaii. They’re also conducting a deeper analysis of the hawskbill’s diet in Hawaii, to help guide conservation efforts of their forage and habitat.