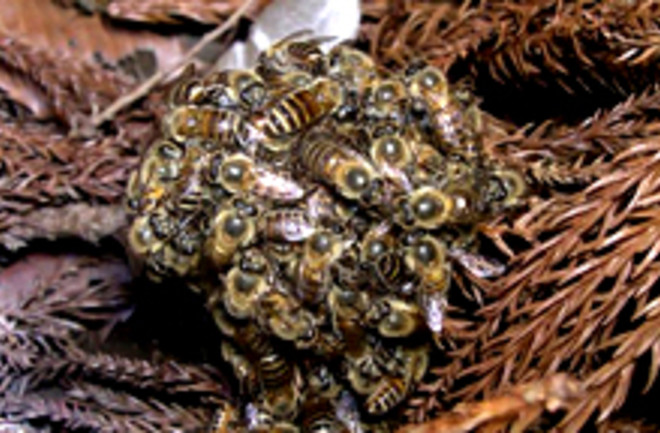 Japanese giant hornets can wreak havoc on a hive of Japanese honeybees, slicing off the heads of worker bees, feeding on the hive's honey, and carrying back the larvae to feed to their own young. But the native bees do have one effective defense against the giant marauders, and it's a battle plan that uses the bees' one clear advantage: numbers. When a hornet scout appears, hundreds of bees instantly swarm around the invader in what's known as a "bee ball." In a new experiment, researchers say they've determined exactly how the bee ball kills. Previously, scientists thought that the heat generated by the mass of vibrating bees killed the hornet. But in the study, published in the journal Naturwissenschaften, researchers found that temperature alone can't do the trick. The hornets

"can survive for 10 minutes at a temperature up to 47C (or 116 degrees Fahrenheit), and the temperature inside the bee balls does not rise higher than 46C" [BBC News]

To conduct their experiments, the researchers

anaesthetised giant hornets and fixed them to the tip either of a thermometer probe, or the inlet of a gas detector. Once the hornets recovered from their anaesthesia, the probes were touched to the bees' nest. "The bee ball formed (around the hornet) immediately," said Dr Sakamoto. After 10 minutes the bees were packed solidly enough around the probe to be removed from the nest in a distinct ball [BBC News].

The researchers noted that carbon dioxide levels increased by 3.5 percent after the bee ball formed, and determined that the suffocating environment combined with the high temperatures to kill the hornets.

The spike in CO2 might be just a metabolic byproduct of the frenetic activity of balling bees. But ... bees might regulate this “panting,” perhaps in response to odor or behavioral cues from the giant hornets. “The specificity of the behavior suggests a very long coevolution in this predator-prey relationship,” Schneider says [Science News].