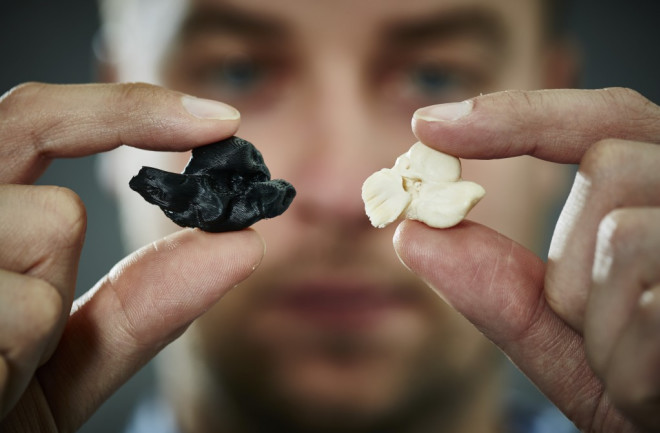 Comparison of inner the inner ear bone (cochlea) of a xenorophid, left, and a modern-day dolphin, right. (Credit: Museum Victoria/Ben Healley)  Modern whales and dolphins navigate in the oceans using echolocation, a system that bounces sounds off objects to reveal their details and distance. These magnificent marine mammals use their distinctive, high-frequency sounds for communicating with each other and hunting prey. The development of this important sensory system was a crucial factor in the evolution of odontocetes, the group that includes toothed whales and dolphins. Now, an international team of researchers has discovered when this key adaptation evolved in their now extinct ancestors.

Using CT scanning, a method originally designed for medical applications, researchers peered inside the fossilized ear bone of an ancient, 26-million-year-old relative of modern odontocetes known as a xenorophid. This method is really taking off in paleontology, says Travis Park, a PhD student at Museum Victoria and Monash University in Australia and lead author of the new study. “You get all the glorious detail of what’s inside the fossil, but it’s a completely non-destructive process — win, win!” he said.

Xenorophids are one of the earliest types of toothed whale, and by examining the fossilized ears of these animals the ancestral condition for all living odontocetes can be inferred. The ear is a complicated, but important, structure for functional echolocation. When high frequency noises are produced in the nasal passages, they are transmitted through the air sinuses and a fatty mass at the forehead called the “melon.” Reflected signals are picked up through fatty pads with acoustic properties that surround the back of the jaws, and direct sound waves to the inner ears.

3D printed models of the inner ear bone or cochlea of the xenorophid, an ancestor to the modern-day dolphin (Credit: Museum Victoria/Ben Healley) “When I first looked at the inner ear of the xenorophid, I was blown away by just how similar this incredibly old toothed whale was to a modern echolocating dolphin,” says Park. He published the team's findings Tuesday in the journal Biology Letters.

Whale of a Discovery

The fossil is housed at the United States National Museum of Natural History in Washington D.C., and was discovered in rocks at Onslow Beach in North Carolina. Features in the cochlea including fewer coils and a shorter length are adaptations indicating a high-frequency hearing ability. It is likely that the ability to tune into high frequency sounds was a key communication and sensory adaptation in the early radiation of odontocetes, paving the way for them to become the most species-rich group in modern oceans.

How the fossil was scanned. (Credit: Travis Park) “Echolocation evolved very rapidly in toothed whales once they diverged from baleen whales and has most likely been a key factor in their success over the past 30 million years”, Park continues. More importantly, this opens up a whole new question for paleontologists. If the earliest odontocetes were already equipped with the ability to echolocate, then what did their ancestors look like even before that? “They must have evolved from something that didn’t quite have all the tricks of the odontocete trade”, explains Dr Erich Fitzgerald, Museum Victoria’s Senior Curator of Vertebrate Paleontology and co-author of the study. “What were those animals like and how did they start down the path to sonic supersenses? The quest for odontocete origins continues.” Park is hoping to continue his research by comparing more fossil species to undertake quantitative analyses, and discovering how and why whales and dolphins are such an amazing evolutionary success story.