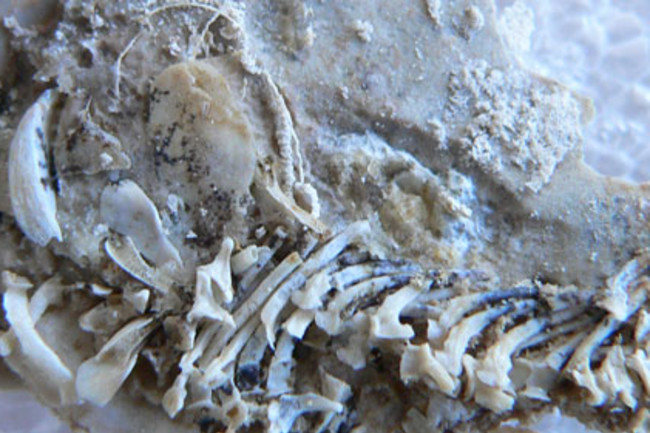 Skeleton of an embryo in an ancient pregnant fish. | Image courtesy of John Long

Sex does not fossilize well. Until this year, the oldest evidence of copulation in higher animals came from 180-million-year-old fossils of fish giving birth. But in May paleontologists announced finding a pregnant fish 380 million years old at a dig in Western Australia, extending the history of so-called internal fertilization and live birth by 200 million years.

A research team led by John Long, head of sciences at the Museum Victoria in Melbourne, unearthed the fish, a previously unknown species from an extinct group called the ptyctodonts. The skeleton of the fish, named Materpiscis, or “mother fish,” contained the teeth, jaws, skull bones, and body plates of a much smaller member of the same species, as well as an umbilical cord connecting the two. Unlike the majority of fish alive today, which fertilize eggs after they have been laid, this one contained an embryo—unmistakable evidence of fertilization within the mother.

Some experts had already concluded that ptyctodonts were having sex because the male pelvic fins have phallic extensions called claspers, similar to the ones modern sharks and rays use to deposit their semen inside females. But the ptyctodont organ is sheathed in bony plates and festooned with spikes—more weapon than love wand. “I thought it would be difficult for them to mate with these bony, spiked claspers,” Long says. “I proved myself wrong.”