In 2011, at least 10 major weather disasters struck the United States alone, inflicting more than $45 billion in damages. Here, a survey of the epic floods, droughts, and other natural calamities that terrorized the planet. 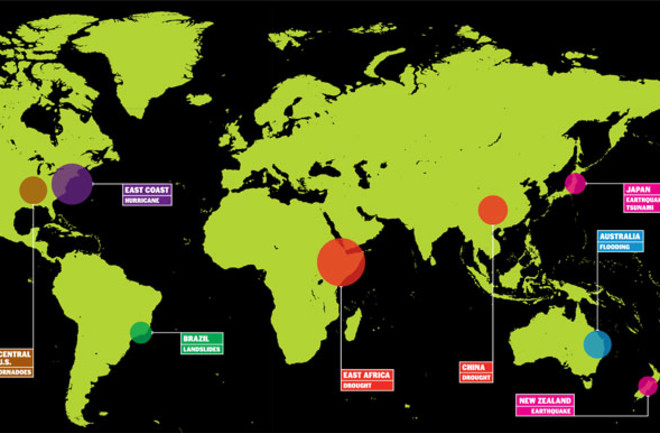 AUSTRALIA///FLOODING Following a long drought, heavy rains in December 2010 and January 2011 caused devastating floods in the state of Queensland, destroying crops and killing 35.

BRAZIL///LANDSLIDES In areas surrounding Rio de Janeiro, landslides triggered by rainfall killed 850 in January. Deforestation may have made soils in the region more prone to erosion.

NEW ZEALAND///EARTHQUAKE With an epicenter 6 miles from downtown, the Christchurch quake in February took 181 lives and caused $12 billion in damages despite having a magnitude of just 6.3.

JAPAN///EARTHQUAKE & TSUNAMI In March, Sendai was rocked by the fourth-largest earthquake on record, a magnitude 9.0. The quake and resulting tsunami killed an estimated 20,000.

CENTRAL U.S.///TORNADOES April set a new record, with 748 twisters in a single month. The season’s tornadoes killed 548 and did more than $24 billion worth of damage.

EAST AFRICA///DROUGHT A continuing drought that the United Nations describes as the worst in 60 years has left 10 million hungry.

CHINA///DROUGHT The southwest is suffering under a long dry spell that threatens the clean water supply for 14 million people.