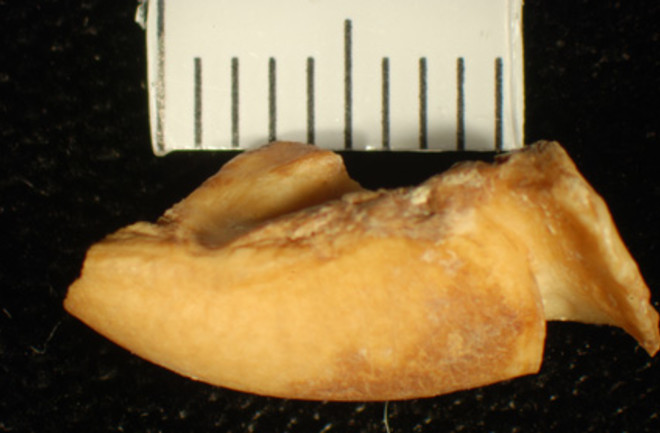 To a human living in North America about 9,400 years ago, dogs may have been both trusted friends and loyal protectors. But they were something else too: dinner. A DNA analysis of an ancient dog's recovered bone fragment reveal that dogs were already domesticated at this stage in North American history, and the fact that the bone bore evidence of passing through the human digestive tract reveals that our ancestors were willing to chow down on their canine companions. The bone was recovered in ancient human fecal matter found in a southwestern Texas cave in the 1970s--but it wasn't until recently that Samuel Belknap III, a University of Maine anthropology graduate student, found a bone within the ancient poo. The discovery was all the more welcome given that he wasn't looking for dog bones in the first place.

“I didn’t start out looking for the oldest dog in the New World,” Belknap said. “I started out trying to understand human diet in southwest Texas. It so happens that this person who lived 9,400 years ago was eating dog.” [UMaine News]

Known as BE-20, the bone fragment measures only about half an inch long, and likely belonged to a 25- to 30-pound dog similar to the short-nosed New Mexico Indian Dog. The bone comes from the area where the skull connects with the spine. The dog's domestic identity was further supported by a DNA analysis at the University of Oklahoma's molecular anthropology lab, which ruled out the possibility that the bone could be from a wolf, fox, or coyote.

“This is an important scientific discovery that can tell us not only a lot about the genetic history of dogs but of the interactions between humans and dogs in the past,” said Belknap. “Not only were they most likely companions as they are today, they served as protection, hunting assistants, and also as a food source.” [UMaine News]

What makes Belknap so sure that that the old dog bone went through a human digestive tract? Couldn't it have been placed there after defecation? Well, no. Not only was the bone found deeply ensconced within the fecal matter, but it also displayed an orange-brown color--a color bones only have after traversing a digestive tract. And it's no surprise to Belknap that early American humans added dog to their menu.

A lot of people in Central America regularly ate dogs, he said. Across the Great Plains, some Indian tribes ate dogs when food was scarce or for celebrations, he said.... "It was definitely an accepted practice among many populations," he said. [Associated Press]

The bone fragment's 9,400-year-old age was determined using accelerated mass spectrometric radiocarbon dating, and Belknap was careful to directly date the sample--something researchers in the past didn't always do.

Direct dating is crucial to the discovery, Belknap said.... “For a long time there were several dog bones from Jaguar Cave in Idaho that were believed to be over 11,000 years old, but once they were directly dated they were found to be only 1,000 to 3,000 years old,” he said. “So it’s a cautionary tale of the need to directly date things. It’s important to do it.” [UMaine News]

But Belknap's study, which has been accepted for publication in the American Journal of Physical Anthropology, has already garnered at least one detractor:

Darcy Morey, a faculty member at Radford University who has studied dog evolution for decades ... said he is skeptical about DNA testing on a single bone fragment because dogs and wolves are so similar genetically. [Associated Press]

Skepticism, though, is a healthy response to a study that has yet to be officially published and therefore isn't available for review. And even though the focus now is on the age of the dog bone and the fact that DNA evidence indicates that it belongs to a domestic dog, Belknap was still able to glean some information pertaining to his original goal--learning about the early Texan's dietary patterns. In this case, even the size of the bone fragment holds relevant information:

"It's small enough to pass through the gut, but it's still larger than you would expect to find," Belknap said of the bone piece. "It's surprising the sizes of some of the bones that people were swallowing. They didn't chew their food quite as well as people do today." [National Geographic]

Related Content: 80beats: Study: Men & Dogs First Became Best Friends in the Middle East 80beats: Dogs Think Like Babies, While Wolves Think for Themselves DISCOVER: Who Shrunk the Dogs Down DISCOVER: Ascent of the Dog DISCOVER: Chilies Domesticated 6,000 Years Ago in the AmericasImage: Samuel Belknap