8 Marine Creatures that Light Up the Sea

How bioluminescence makes the ocean go round. 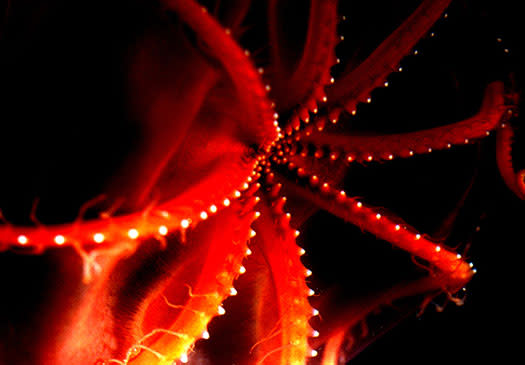 To truly appreciate the wondrous beauty of life in the ocean, you have to see it at night. When the sun sets, it comes to life in a dazzling display of colors and lights that rivals the best fireworks shows.

An astonishing variety of species use bioluminescence (the natural production of visible light through a chemical reaction) to catch food, hook up with mates, or scare off intruders. In this gallery, we'll look at some of the wildest, and most clever, uses of light at sea.

Being without adhesive suckers would seem to put you at a major disadvantage if you're an octopus, but the deep-sea octopus Stauroteuthis syrtensis manages just fine. In the place of the usual suckers are rows of flashing photophores, which the octopus cannily uses to lure its prey to certain death or to startle intruders.

Stauroteuthis feeds on small crustaceans that are attracted to light. Once the unsuspecting critter is close, the octopus grabs it and traps it within a mucus web produced by glands on its arms. In the first study (pdf) to document Stauroteuthis' bioluminescence, Duke University's Sonke Johnsen and colleagues observed that, when disturbed, the octopus splayed out its arms and exposed all its flashing photophores in an attempt to scare off unwanted guests. 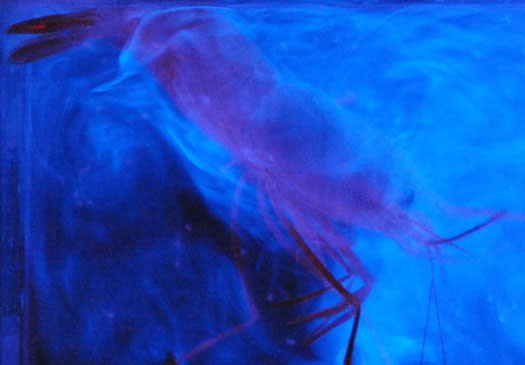 Some species know how to make a quiet exit. But the deep-sea shrimp retreats in a blaze of bioluminescent glory. When confronted by a predator, the bright red critter spews a glowing blue ooze from the base of its antennae into the water.

The light temporarily stuns the offender, giving the shrimp precious time to back-flip its way to safety. It's similar to the time-tested strategy used by squids and octopuses, which squirt clouds of ink into the faces of their enemies. 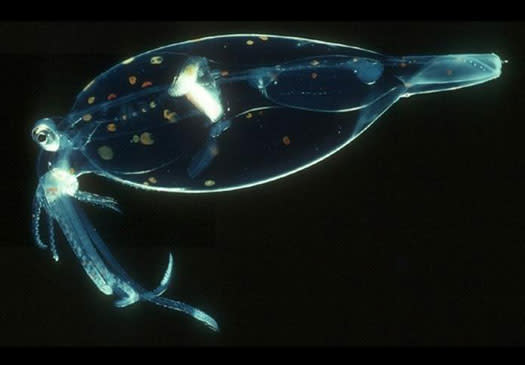 The glass squid is a master of luminous disguise. Unlike the many species that use bioluminescence as an attention-grabbing beacon, this animal uses light as a cloak to evade prying eyes.

Aside from its opaque eyes and the polka dot-like chromatophores (pigmented cells that aid in camouflage) that cover its body, the glass squid is completely transparent. The chromatophores are not an issue, but the opaque color of its eyes can be a dead giveaway. Many species hunt for prey by scanning the water column above them, looking for any telltale silhouettes that might signal the presence of their next meal.

To confound its potential predators, the glass squid makes use of two U-shaped light-emitting photophores located at the base of its eyes: the lights cancel out the shadows cast by the opaque eyes. The effect of this strategy, called counterillumination, is to break up the squid's silhouette by mimicking the intensity and color of downwelling light from the surface. 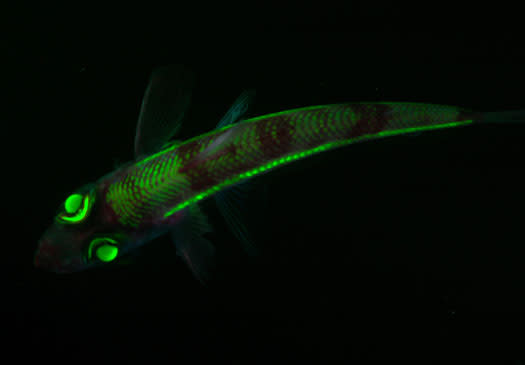 To survive in the dark recesses of the ocean, it helps to have a sharp pair of eyes. And preferably eyes that can see through others' visual deceits. On both counts, the short nose green-eye fish swims above the fray.

Like many deep-sea predators, its eyes are turned upward to scan for prey blocking the light that comes from above. But where another fish might have been fooled by a prey using counterillumination, the short-nose green-eye fish uses its sophisticated peepers (pdf) to break up any bioluminescent shams.

The green fluorescent pigment in the lenses of its eyes acts like a filter, absorbing the sea's ambient deep blue light. Researchers believe this property allows the short-nose green-eye fish to distinguish between the lighter shade of blue given off by bioluminescent creatures and the richer blue of the ocean. 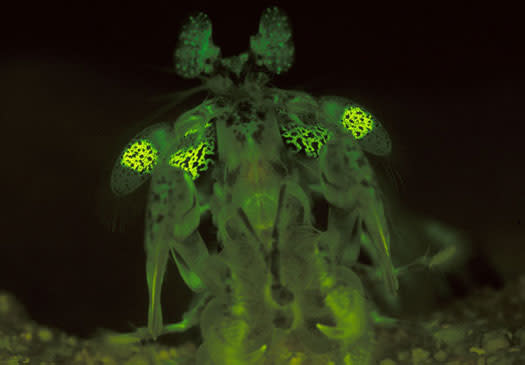 The tropical mantis shrimp is known for one thing above all else: its amazing eyes. Unlike our own primitive eyes, which detect three primary colors, the mantis shrimp's can see 12. They can also perceive different forms of polarized light--light waves oscillating in a single direction. This ability is primarily thought to help the shrimp nab the transparent animals that it feasts on.

On the dimly lit seafloor, where the shrimp dig their burrows, their complex eyes have another crucial function: interspecies communication. Pigments in the shrimp's appendages absorb the ocean's ambient blue light and emit it in a yellow-green color, resulting in the characteristic spotty markings. The light's wavelength is so specific that only other members of the species can trace it, which allows the mantis shrimp both to flaunt its goods to prospective mates and to threaten encroachers. 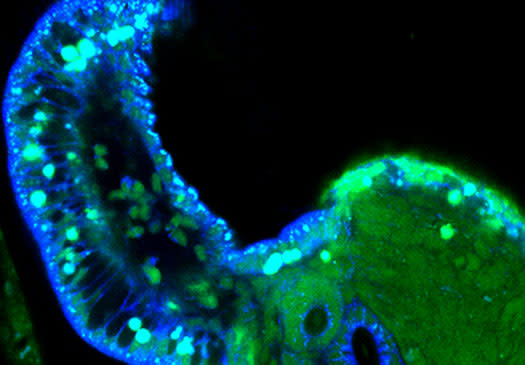 At first blush, the Hawaiian bobtail squid looks like just another bioluminescent cephalopod. Like many of its relatives, the bobtail squid makes deft use of its light-emitting photophores to hunt, communicate with its peers, and hide from predators lurking below. But it's a fraud.

Instead of producing the light itself, the squid relies on a bioluminescent bacterium that dwells within its photophores. In exchange for shelter and a stable source of nutrients, the bacteria provide the squid with the ability to make light.

The relationship begins immediately at birth. After emerging from its egg, the juvenile bobtail squid acquires the bacteria from the environment, and they start the process of colonizing its developing light organs.

Studies have shown that the squid can even control the intensity of the luminescence produced by the bacteria in order to match that of the downwelling light in the water column. 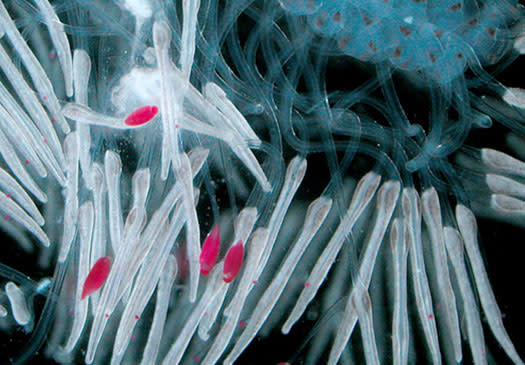 When something looks too good to be true, it usually is. Take the case of the deep-sea siphonophore, which makes red light to trap its prey. A close relative of the jellyfish, it was recently discovered by a team of Monterey Bay Aquarium Research Institute (MBARI) researchers.

Like all siphonophores, this unnamed species is what scientists call a "superorganism": an animal that grows by budding off highly specialized structures, known as zooids. Each zooids performs a specific function, such as feeding or reproduction.

This creature's feeding zooids employ unique red "lures" at the tips of some tentacles to catch unwitting passers-by. To the fish that fall for the alluring bait, the red fluorescent tip looks just like a fat, juicy crustacean. The dangling blobs themselves are harmless, but nearby tentacles are equipped with a battery of potent stinging cells, that make quick work of the small fish.

Photophores contained within the tips are responsible for producing the red light. MBARI scientist Steven Haddock believes the lures are an adaptation for living at depth, where food is scarce and fish are even scarcer. 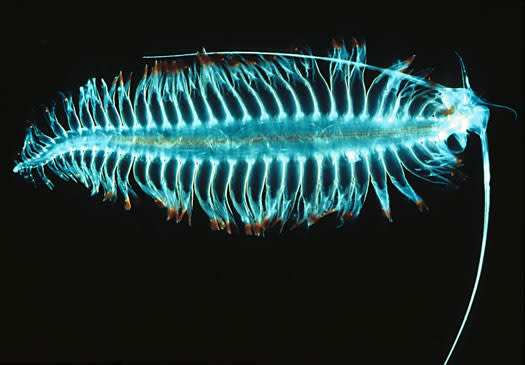 Some bioluminescent species get really cranky when you disturb them. Tomopteris, a tiny marine worm, erupts into a shower of angry sparks and unloads its eggs into the water before rapidly undulating away. What is unusual about this worm is that the sparks it shoots from its paddle-shaped swimming legs are golden yellow in color and not blue, like practically every other bioluminescent organism.

Other marine worms are thought to release glowing blue particles into the water to make themselves look less tasty to hungry predators. Few deep-living species have the ability to detect yellow light, which, because it has a higher wavelength, gets absorbed in the shallow surface waters, so it is unclear why Tomopteris uses it. For the moment, researchers are still trying to suss out the chemistry of the yellow luminescence, which may yield some clues about its unique function.