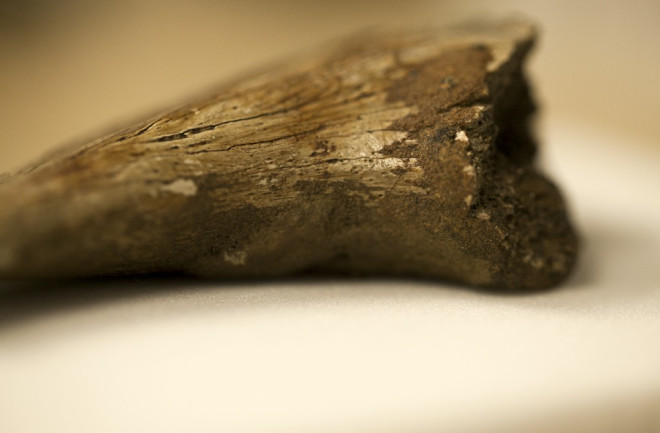 Theropod claw in which the blood cells were found. Credit: Laurent Mekul

It might sound like something out of Jurassic World but it’s true: Inside fossilized dinosaur bones, researchers have discovered 75-million-year-old red blood cells and proteins.

This discovery indicates that blood and other cells might be preserved much longer in fossils than previously believed. And studying these cells in the future could give us brand-new insights into how dinosaurs looked and behaved.

Scientists’ understanding of dinosaurs has been revolutionized in the last 25 years by the discovery of fossilized soft tissues. We now have evidence for the original material of skin, feathers and feather-like structures, color-bearing organelles, and even muscle fibers and cellular structures found in Tyrannosaurus rex. These have usually been found in exceptionally well-preserved specimens.

Many of these discoveries, however, have been contentious within the paleontological community, and the presence of molecular-level preservation in the fossil record remains controversial. This is because proteins and other molecular components are thought to break down within about four million years.

However researchers Sergio Bertazzo and Susie Maidment found that not only could these structures be preserved for 75 million years, but they could persist in run-of-the-mill museum collections that researchers wouldn’t normally glance twice at.

The scientists examined fragments from the insides of eight pretty ordinary Cretaceous dinosaur bones from North America. They used a scanning electron microscope to distinguish materials of different density, highlighting several distinct cellular-level structures. In particular, in the claw of a theropod dinosaur the researchers spotted round structures that looked almost exactly like blood cells. In four other specimens, they found fibrous structures that resembled the collagen found in bones of birds.

Next, to see what the cell-like structures looked like internally, Bertazzo and Maidment used a focused ion beam to strip away incredibly fine layers from them, one by one. They discovered an internal structure within the red blood cells, which based on its size and shape is almost certainly the nucleus. Using another technique, mass spectrometry, they analyzed the chemistry of these structures and found evidence of amino acids (the building blocks of proteins) that were almost identical to those from a living emu.

So, dinosaur blood and proteins can be preserved far longer than anyone previously thought possible. What then does that mean for that other fascinating molecule, DNA?

Maidment says that there was no evidence for preserved DNA in the cells they found, so bad news for Jurassic Park fans. But, she continued, “I think it is generally unwise in science to say ‘never.’ Increasingly, studies like ours are showing that original components can be preserved over geological timescales. So perhaps one day DNA fragments might be found in an exceptionally preserved dinosaur fossil.”

Even if that Jurassic Park dream is never realized, the research will give new insights into dinosaurs. Much of what we know has been based on comparison with their descendants, birds, and cousins, crocodiles. Now we have direct evidence that we can begin to use to investigate dinosaurs, as well as other extinct animals, at a whole new level. For example, red blood cell size is known to correlate with metabolic rate in birds and reptiles. The discovery of blood cells in dinosaurs may help to solve the long-debated question of whether they were exothermic like other reptiles, or endothermic like mammals.

“In ten to fifteen years we might know a lot more about dinosaurs than we ever thought possible: information about physiology and what they looked like that we could never get from the bones alone. Our discovery has simply shown the potential for what might be preserved if we look in the right place,” Maidment says.