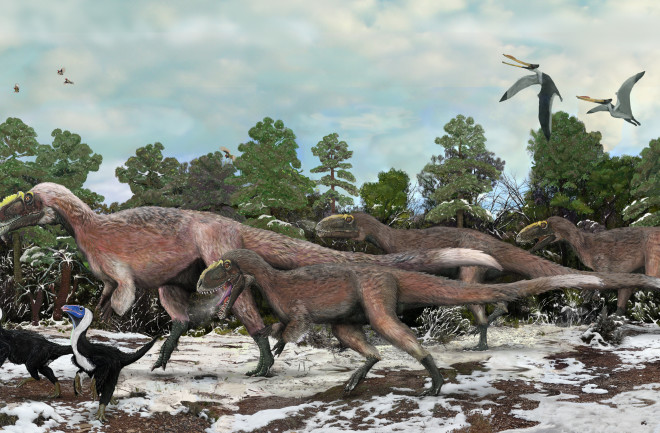 A pack of feathered carnivores in China, illustrated. | Brian Choo

Big, scary, and—fluffy? That is the profile of Yutyrannus, a newfound relative of Tyrannosaurus rex and the first large dinosaur known to have sported feathers. In April researchers unveiled an adult and two juvenile fossils of the dinosaur, unearthed in northeast China. An adult Yutyrannus, whose name means "beautiful feathered tyrant," reached nearly 30 feet long and weighed 1.5 tons. Preserved fossil fibers suggest Yutyrannus had bristle-like hairs over most of its body. Corwin Sullivan, a paleontologist at Beijing's Institute of Vertebrate Paleontology and Paleoanthropology who helped interpret the remains, thinks Yutyrannus "would have been rather shaggy-looking, a killer fuzz ball with deadly teeth and claws." Although its feathers were too spindly for flight, they might have provided insulation during the relatively cool Early Cretaceous, 125 million years ago. The discovery raises the possibility that other big, carnivorous dinos, including the renowned T. rex, may have sported plumage as well.

The house-cat-size Pegomastax africanus, which lived 200 million years ago, had quills and a fanged beak. "It has the hallmarks of a great Halloween mask," says discoverer Paul Sereno. The fangs probably helped nip at competitors; the quills probably made it look bigger and less appetizing. Pegomastax was found in a South African rock that had been languishing on a shelf, unexamined, for decades.