A creature with no brain can learn from and even anticipate events. 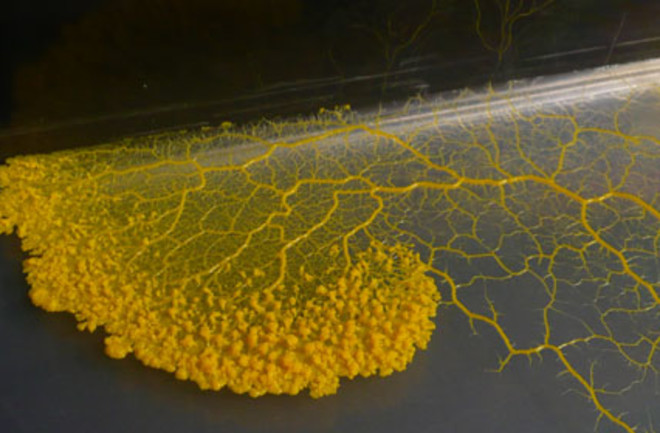 Single-celled slime molds demonstrate the ability to memorize and anticipate repeated events, a team of Japanese researchers reported in January. The study [pdf] clearly shows “a primitive version of brain function” in an organism with no brain at all.

In their experiment, biophysicist Toshiyuki Nakagaki of Hokkaido University and colleagues manipulated the environment of Physarum slime-mold amoebas (near right). As the cells crawled across an agar plate, the researchers subjected them to cold, dry conditions for the first 10 minutes of every hour. During these cool spells, the cells slowed down their motion. After three cold snaps the scientists stopped changing the temperature and humidity and watched to see whether the amoebas had learned the pattern. Sure enough, many of the cells throttled back right on the hour in anticipation of another bout of cold weather. When conditions stayed stable for a while, the slime-mold amoebas gave up on their hourly braking, but when another single jolt of cold was applied, they resumed the behavior and correctly recalled the 60-minute interval. The amoebas were also able to respond to other intervals, ranging from 30 to 90 minutes.

The scientists point out that catching on to temporal patterns is no mean feat, even for humans. For a single cell to show such a learning ability is impressive, though Nakagaki admits he was not entirely surprised by the results. After working with the slime mold for years, he had a hunch that “Physarum could be cleverer than expected.” The findings of what lone cells are capable of “might be a chance to reconsider what intelligence is,” he says.