#70: Ancestral Whales May Have Given Birth on Land 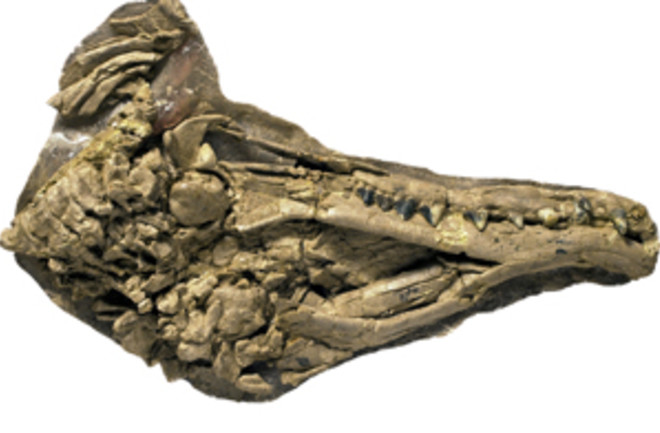 A ventral view of the skull of Maiacetus inuus. | University of Michigan Museum of Paleontology

While digging for fossils in Pakistan, paleontologist Philip Gingerich of the University of Michigan discovered the fossil skeleton of a 47-million-year-old pregnant whale with her fetus positioned for headfirst delivery—a surprise since modern-day whales are born tail-first to prevent drowning. The clear implication: Ancestral whales may have given birth on land.

“Virtually all of mammal evolution has occurred on land,” says Gingerich, who in 2001 described fossil evidence that whales descended from split-hoofed mammals, a finding that compounded earlier indications of a genetic relationship between whales and hippos. Fossils indicate that whales started to make the transition from land to sea about 50 million years ago. The pregnant specimen, Maiacetus inuus, was found near what was once a coastline. It probably looked like a long-snouted sea lion, with flipperlike limbs and a long, muscular body. This intermediate species may have spent most of its time in the water, coming onto land to rest, mate, and give birth. A second, even more complete Maiacetus fossil was found nearby; it appears to be a male, slightly larger.

Gingerich and team nearly overlooked the two skeletons. “There was just a trace of chalk dust on the ground,” he says. “I thought it was nothing at first, but when we came to the mother’s skull, I knew this was something special.”