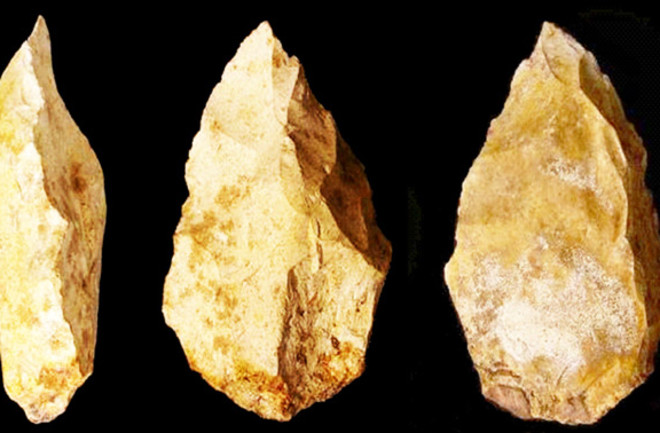 A 125,000-year-old stone tool from Arabia resembles African artifacts of the time. | Courtesy of Science/AAAS

Archaeologists have long believed that modern humans stayed close to Africa until around 60,000 years ago, when they began venturing across the rim of the Indian Ocean. That theory took a big hit last January when archaeologists reported the discovery of stone tools in a rock shelter located in the present-day United Arab Emirates. The find suggest bands of humans reached southern Arabia as early as 125,000 years ago.

The artifacts are similar to tools used by modern humans at contemporaneous sites in eastern Africa. According to project archaeologist Anthony Marks of Southern Methodist University, southern Arabia would not have been a forbidding destination at the time. “We now know that 130,000 years ago, the Indian Ocean monsoons pushed farther north, and Arabia became grassland,” says Marks, who thinks the shifting climate opened new territory for human exploration. Although some researchers suspect that earlier hominids, not modern humans, made the stone tools, Marks is hopeful that future digs in Arabia, Iran, and western India will unearth still more evidence of humanity’s bold, early route out of Africa.