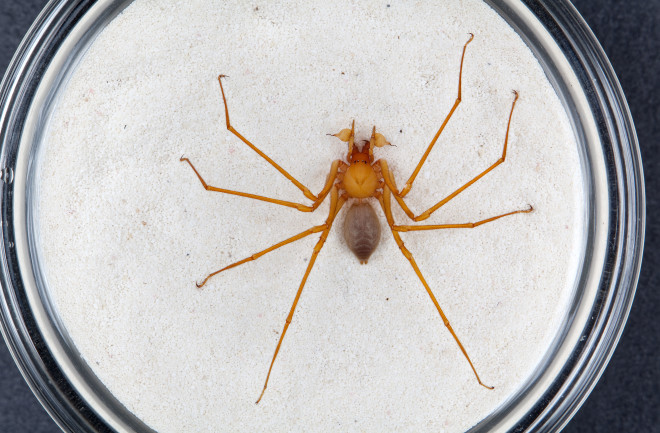 Hook-Legged Spider: A group of cave explorers in southern Oregon discovered a new family of spider that grows up to three inches long and wields hooklike claws at the end of each leg. The claws are most likely used to snatch insects like midges midflight. The spider, Trogloraptor marchingtoni, has poisonous glands but is not considered dangerous to humans. It is the first native spider family identified in North America since 1890. (Credit: Charles E. Griswold/California Academy of Sciences)

Sign up for our email newsletter for the latest science news
Carnivorous Sea Sponge: Scientists from the Monterey Bay Aquarium Research Institute discovered a meat-eating sponge, Chondrocladia lyra, at 11,000-foot depths off the California coast. Its harplike vanes are covered with hooks that snare small crustaceans. The creature releases sperm packets from the balls atop the vanes; they are caught by nearby sponges for fertilization. (Credit: ©MBARI)
World's Tiniest Frog: This housefly-size frog, Paedophryne amauensis, has snatched the record as the world’s smallest vertebrate. One-third of an inch long and weighing 0.02 gram, it is a millimeter shorter than the Southeast Asian fish, the runner-up. Louisiana State University herpetologist Christopher Austin announced last January that he discovered the species after following chirping noises in a Papua New Guinea forest. (Courtesy Christopher Austin/Louisiana State University)
1 free article left
Want More? Get unlimited access for as low as $1.99/month
Subscribe