6 of the World’s Oldest Maps

Follow the early history of cartography through its most ancient and significant developments. 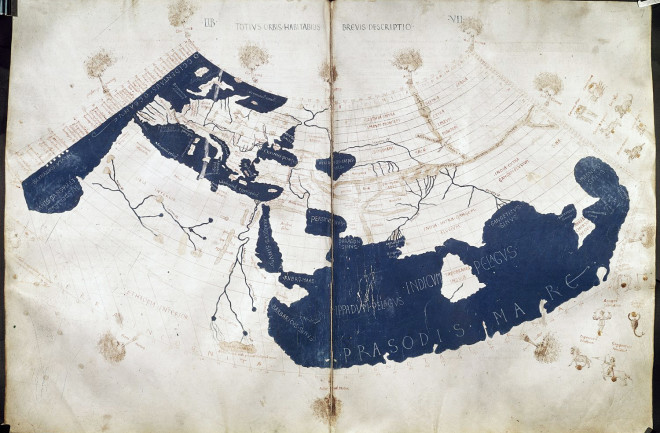 This representation from Ptolemy's Geography shows "Sinae" (China) at the extreme right, beyond the island of "Taprobane" (Ceylon or Sri Lanka, oversized) and the "Aurea Chersonesus" (Southeast Asian peninsula). (Credit: Public Domain/Wikimedia Commons)

Humans have made maps for untold thousands of years. They’re among the oldest modes of communication, predating written language. But, as cartographer Norman Thrower writes in Maps and Civilization: Cartography in Culture and Society, “Only a small fraction of the maps produced in earlier ages has survived.”

A handful remain with us, though, including these examples drawn from vastly different times and places. Together they hint at the fascinating and diverse ways our ancestors located themselves and their worlds in space. “Viewed in its development through time,” Thrower writes, “the map details the changing thought of the human race, and few works seem to be such an excellent indicator of culture and civilization.”

The earliest known attempt to show the Earth in its entirety was the Imago Mundi, or Babylonian map of the world, thought to date to around 600 B.C. The city of Babylon itself figures as a large rectangle, bisected by another rectangle representing the Euphrates River. A few neighboring cities dot the area nearby, and surrounding them all is a ring labeled the “Salt-Sea.” Beyond this circular waterway lie eight islands inhabited by legendary beings.

The Imago Mundi is just one of many maps inscribed in the clay tablets of Mesopotamia. It seems to be unique, however, in its scope. “Most ancient clay maps are large-scale representations of small areas, showing irrigation, fields and, most surely, ownership,” John O. E. Clark writes in Maps that Changed the World. They are also quite precise. “In contrast,” Assyriologist Wayne Horowitz writes, “the relative size and location of many of the features on the World Map seem preposterous.” But for its purpose — to mythologize, not to settle land disputes — it probably served just fine.

Meanwhile, in Greece, the Milesian philosopher Anaximander pursued a similar goal: to map the whole world. His original work is lost to history, but scholars have tried to reconstruct it using descriptions from the historian Herodotus. It was flat and circular like a disc, ringed by ocean in a similar way to the Imago Mundi. Three land masses — Europe, Asia and Libya — fill the center, with the Nile River and the Mediterranean and Black seas separating them. Anaximander is considered one of the founders of geography, together with Hecataeus, a fellow Milesian who improved his map with far more detail.

Around the same time, the mountain-dwelling people of northern Italy etched the Bedolina map into glacially polished granite in Valcamonica, a valley that contains one of the world’s greatest collections of rock art. The 8-by-14-foot petroglyph stands among hundreds of thousands of others, likely created in the first millennium B.C. It’s many abstract symbols are supposed to depict buildings, fields and paths, among other things. Scholars disagree, though, on whether the map was meant as a portrayal of an actual geographical area, or only as a symbolic statement — about the relationship between its creators and their environment, for example.

Some prehistoric cultures devised “maps” of a less conventional kind. Indigenous Australian peoples saw their world in terms of “songlines,” which are essentially oral maps based on sacred features of the landscape. First and foremost they record traditional beliefs about the Dreamtime, a mythological period during which the ancestors of all living creatures shaped the world we see now. But the songlines also involve recognizable places and objects, meaning they can be used for navigation as well. “The mapping of these eternal patterns … was more than a set of spiritual beliefs,” Clark writes. “It was also a practical means by which all the Aboriginal tribes managed to survive.”

This granddaddy of all roadmaps stretches 22 feet to make room for all the thoroughfares of the ancient Roman Empire. The version in existence today is a 13th-century replica of the original, which some scholars believe was drafted in the first century B.C. at the behest of Roman general Marcus Agrippa. It extends as far west as Britain and Spain, as far east as India, and charts some 50,000 miles of stone-paved highway. Though not drawn to scale, the map lists mileage between towns, and offers prominent landmarks for the traveler to follow. (Even so, G0ogle Maps may give better results in the 21st century.)

This representation from Ptolemy's Geography shows "Sinae" (China) at the extreme right, beyond the island of "Taprobane" (Ceylon or Sri Lanka, oversized) and the "Aurea Chersonesus" (Southeast Asian peninsula). (Credit: Public Domain/Wikimedia Commons)

Of all the ancient maps, this one was surely the most influential. As Jerry Brotton writes in A History of the World in 12 Maps, Claudius Ptolemy’s remarkably comprehensive Geography — completed around 150 A.D. — “would come to define mapmaking for the next two millennia.” It wasn’t a map in the standard format, but an eight-volume book that claimed to describe the entire known world according to mathematical principles, with longitudinal and latitudinal coordinates for various locations. It boasted an astonishing 8,000 place names, including regions as far flung as Iceland and China. As with the Peutinger Table, the originals are lost. Likewise, the oldest known version comes from 13th-century Byzantium, where scholars resurrected the map that would dominate and inform cartographic efforts for centuries to come.