#58: Orangutans Use Tool to Lower the Sound of Their Voices

By putting leaves between their lips, the apes apparently make themselves sound bigger and more threatening. 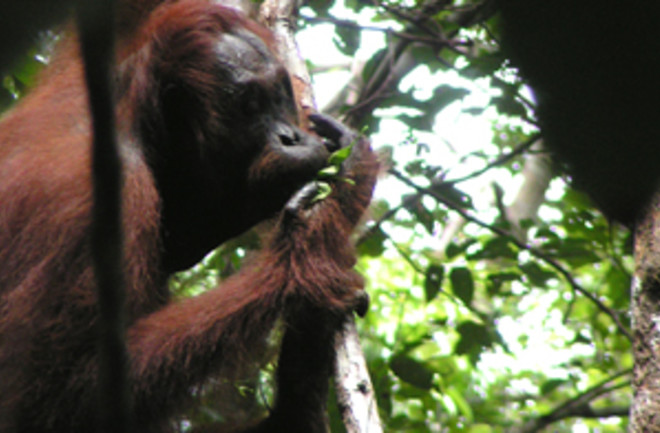 An orangutan changes its voice with a leaf. | M.E. Hardus

Five wild orangutans in Borneo—nicknamed Sam, Henk, Rambo, Kondor, and Sultan—have learned to create a new kind of distress signal, using leaves to lower the pitch of their common warning call, known as a kiss-squeak. The leaf-produced kiss-squeaks seem intended to make the orangutans sound bigger and more threatening. “Primates were assumed to have no control over their calls,” says Madeleine Hardus, a behavioral biologist at Utrecht University in the Netherlands, who classifies the orangutans’ ability to alter their standard call as “a cultural innovation.”

Hardus and her colleagues discovered that the orangutans had developed leaf-assisted calls to identify humans (and probably predators as well). She hypothesizes that the technique is passed down from one orangutan to the next. Researchers have rigorously documented leaf adaptation in the cluster of five but have also observed the behavior in the wider orangutan population.