While lions and giant pandas typically steal the show, keystone and indicator species like tiny frogs are also worth a look at the zoo. 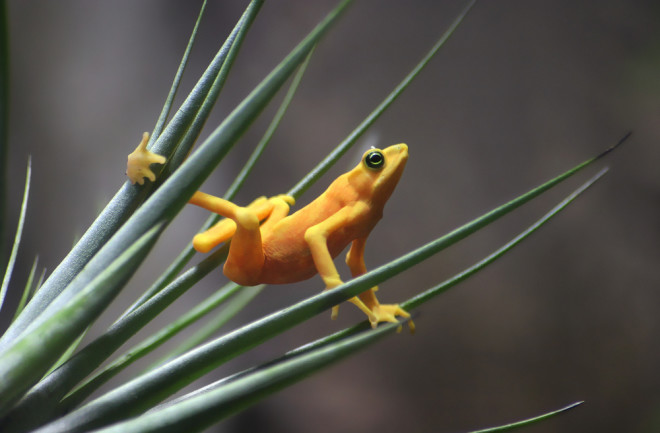 But even though these large animals at the zoo receive the most attention, they are often not critical to biodiversity. These animals are called flagship species — a species with appealing features that experts select to make people care about conservation.

Zoos dedicate a lot of time and resources to engage people in learning about biodiversity and conservation, and advocates carefully craft messaging about these species to make their stories compelling.

“Although there are species like lions that may be the top predator in an ecosystem, that does not mean that’s the most important species in an ecosystem,” says Dustin Smith, a curator of herpetology, fish and invertebrates at the North Carolina Zoo. “A lot of mammals get these endearing terms, but that doesn’t spread across to the rest of the species that are just as important."

In addition, housing certain flagship species is sometimes costly compared to the price of keeping smaller animals. Renting a panda from a Chinese zoo, for example, can cost up to one million dollars a year. And yet many zoos house dozens or hundreds of other species that play an even more crucial role in their ecosystems than a flagship species — and cost less than the panda bear.

These species are the tiny frogs that hide amongst the fake leaves in the amphibian section, the snake coiled in a dark corner of the reptile house or the small mammals that spend most of their time burrowed underground in their exhibit. These aren’t the animals that first catch your eye when you walk past an exhibit, or ones featured in the news.

And while every species, from the Javan rhinoceros to the rainbow snake, plays a role in biodiversity and conservation efforts, it’s worth dedicating some time to the less popular exhibits the next time you visit the zoo. To kickstart that visit, here’s a selection of non-flagship species found in zoos who play an important role in their habitats.

Prairie dogs are a keystone species that support over 130 other species. Experts call them ecosystem engineers since when they create their burrows, they fertilize, churn and aerate soil of the grasslands where they reside. This allows vegetation to thrive and supports large, prairie-grazing species, like bison. Their burrows function as shelters for other animals like jackrabbits and rattlesnakes, too. And the prairie dog itself serves as prey for eagles, black footed ferrets and coyotes.

Experts consider the beaver a keystone species for many habitats. They are the architects of their ecosystems — when they build dams, they help to change the natural flow of waterways, and create and maintain wetland and floodplain habitats. Their dams also help trap sediments and filter nutrients, allowing other aquatic species, like fish and plants, to thrive.

Does your local zoo have a botanic garden or landscaping that attracts bees? The bee, alongside other pollinators, aides in the reproduction of up to 90 percent of the world’s flowering plants. They help pollinate vegetables, fruits and vital crops for human populations, as well as plants that support countless other species around the world.

The eastern indigo snake is the largest nonvenomous snake in North America and is typically found in southern states including South Carolina, Mississippi, Florida, Alabama and Georgia. Experts consider it a keystone species in the longleaf pine wiregrass and sandhills ecosystems, because it helps keep other snakes in check. Its burrows also serve as shelter for other species.

Experts consider frogs as an indicator species in many ecosystems. Since they absorb external nutrients and pollutants through their thin skin, they are the first to die when something is out of balance in an ecosystem. The International Union for Conservation of Nature red list includes the Panamanian golden frog as critically endangered. It’s extinct in the wild, in many parts of Panama, where a fungal disease called chytridiomycosis wiped them out. Several zoos participate in the Panamanian golden frog Species Survival Plan to keep the species alive in captivity.