5 Of The World’s Largest Insects

From moths the size of your hand to beetles that can snap through pencils, these giant insects give will make your skin crawl. 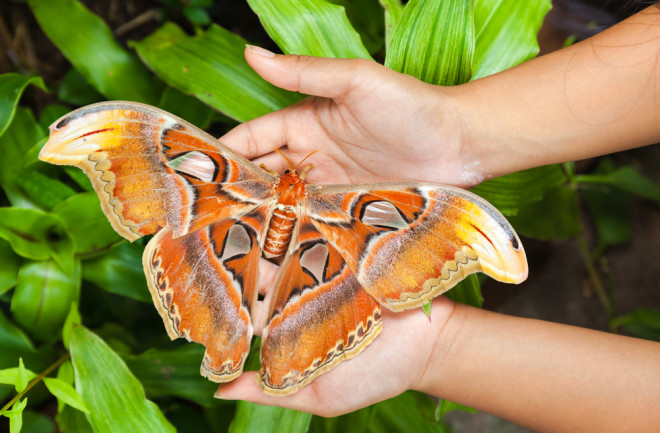 Insects represent approximately 80 percent of animal life on Earth. Although more than 1 million have been named thus far, it’s estimated there are 5.5 million insect species in total. They range in size from a wasp that’s almost imperceptibly small to a roach that reaches almost eight inches in length — and beyond. It’s believed that largest insect that ever lived was a Meganeuropsis, dating back hundreds of millions of years. Related to current day dragonflies, these gargantuan predatory creatures grew to have an 18-inch body, with a wingspan of nearly two-and-a-half feet. Although we don’t have anything to rival the Meganeuropsis today, there are plenty of other insects that are still impressively large. Here are five of them.

Found in Asia, these moths have a wingspan that can reach 12 inches — larger than the palm of a hand. Like all moths, the atlas starts first as a caterpillar. In this case, the caterpillar feeds constantly, first on its own shell and then moving on to guava, cinnamon and citrus tree leaves. Vulnerable to predators including lizards, birds and ants, the atlas moth is capable of spraying a powerful irritant from more than a foot away. Another survival mechanism they have in their favor is the pattern on the tips of their wings, which resemble the head of snake. The moth can also drop to the ground and shake its wings, mimicking the movements of a snake’s head.

Several years ago, entomologist Zhao Li discovered what is currently considered the world’s longest insect — a new species of walking stick. Beating the previous record holder, which was a Malaysian walking stick, the Phryganistria chinensis reaches more than two feet long. Zhao heard about sightings from local villagers in Guangxi Province, China, and when he was collecting insects on a mountain one night in 2014, he saw one for himself. Males die immediately after mating, while females live for several months longer. Females are also capable of parthenogenetic reproduction, meaning they can produce female embryos without fertilization taking place. Walking sticks inhabit every continent except Antarctica, and are mostly found in warm areas. Able to blend into their environment, they use their appearance to help evade predators such as reptiles, primates, and birds. However, they can’t escape bats — which rely on echolocation rather than sight to locate their prey.

The giant weta is essentially a massive cricket. Its full name, “wetapunga,” means “God of Ugly Things” in Maori. Native to New Zealand, there are about 70 species of weta and 11 types of the giant variety. Unlike other crickets — or their close relatives, the grasshopper — giant weta can’t fly or jump due to their heaviness. They can weigh up to 2.5 ounces, which is heavier than a mouse. They are wingless and tend to be quiet, slow and docile. Prey to geckos and rats, giant weta have a hard exoskeleton (which they breathe through) and spines on their legs for protection. Interestingly, their ears are located on their legs. Giant wetas are found in burrows and caves, along with rotting logs and trees. Check out this video of a wildlife photographer’s interaction with a giant weta.

Read More: Why Are We Afraid Of Bugs?

With more than 160,000 known species of flies, it’s estimated there are possibly millions more yet undiscovered. The biggest flies belong to the Mydas family, with the largest being the Guaromydas heros. Mydas flies look similar to a wasp or hornet — which serves as a deterrent to predators. However, they’re actually harmless — mydas flies don’t bite or sting. They communicate through buzzing sounds made by beating their wings. Like all insects in the order Diptera, the mydas is considered a “true fly,” and possesses only one set of wings. They live in soil or decaying wood during their larval phase, during which they feed on grubs. It’s believed that adults feed on nectar and pollen.

The titan beetle is among the world’s biggest insects and is the largest beetle on Earth, growing up to 6.5 inches long. Found in the rain forests of South America, they defend themselves by using their strong jaws. Their bite is capable of tearing flesh and is so strong they can snap a pencil in half — although titan beetles are not known to attack unless threatened. Other defenses they use are sharp spines on their legs and hissing sounds. Although larvae have never been found, it’s known that adults only live for a few weeks. Titan beetles don’t eat as adults, because they are solely focused on mating. These giants are able to fly short distances despite their large size, although it’s not common.