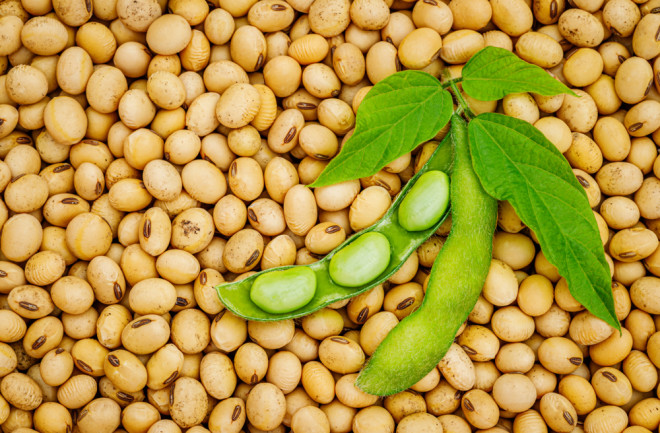 April is National Soy Month, making it a good time to explore and celebrate the versatile uses of the soybean. Many foods are derived from soybeans, including soy milk, miso paste, tempeh, tofu and edamame. Although the United States is the world’s top soybean producer, the largest soybean farm, Bon Futaru, is located in Brazil — and has 555,000 acres of soybeans. From edible products to other uses, the small but powerful soybean has a lot to offer. Here are five interesting things you didn’t know about soy.

Soybeans are part of the legume family, as are peas, lentils and beans. Believed to have first been cultivated domestically in ancient China, soybeans were used for thousands of years in Asia before making their way to America in 1804. By the mid-1900s, they were an important part of farming in the Midwest and South. The soybean plant can reach heights of 6.5 feet and has self-fertilizing flowers. The flowers are only about a quarter of an inch large and can be purple, white or pink. Although not all the flowers produce pods, 50 to 80 percent do. Seed color varies, but when it comes to commercial production, most are tan or brown. In the United States, soybean production for 2021 reached a record-high total of 4.44 billion bushels — including record-high yields in 21 states.

There Are Soy Sauce Artisans

Though it originated in China, the soy sauce industry grew and thrived during Japan’s Edo period with exports beginning in the late 1730s. Although there are slight variations, Japanese soy sauce is primarily from soybeans and wheat that are fermented using koji mold. There are families in Japan that have been making soy sauce for hundreds of years by employing traditional production methods — including the use of wooden barrels called “kioke.” This is a very serious craft, creating what is considered an artisan quality product. There’s even an annual kioke festival held on Shodoshima island. The people who attend are soy sauce producers, chefs and makers of other fermented products — along with anyone who appreciates and wants to preserve kioke culture.

Soybeans Are Used To Make Biodiesel

Biodiesel is a biodegradable and renewable type of fuel, mostly derived from vegetable oils —and occasionally animal fat or algae. Seldom used by itself, biodiesel is mixed with regular diesel. Biodiesel releases fewer carbon emissions than petroleum diesel and doesn’t contain toxic sulfur and carcinogenic benzene. Used in city and state vehicle fleets, biodiesel is also used by the U.S. military, in manufacturing and farming equipment and in the construction industry. While there are advantages to biodiesel, there are also drawbacks. It’s susceptible to thickening (called “gelling”) in cold weather. It can damage vehicle filters and pipes. Biodiesel also is more expensive and provides lower fuel efficiency than regular diesel.

Soy Is (Mostly) Good For Your Health

There are health benefits to soy, which include providing a good source of heart-healthy fats, fiber, potassium and iron. Soy has also been shown to slightly lower bad (LDL) cholesterol and helps relieve menopause symptoms. It may have a protective effect against prostate and gastrointestinal cancer, too. And although there used to be concern about soy consumption leading to breast cancer, no evidence yet to back the claim up. In fact, studies show breast cancer risk may actually decrease. Containing isoflavones, which are estrogen-like compounds, soy can become an endocrine disrupter when consumed in large amounts. It’s recommended to avoid highly processed soy products and stick with those that don’t have added sugar, preservatives or excess sodium. People with thyroid issues should be especially careful with soy and check with their doctor before consuming.

Soy Crayons Are A Thing

Most crayons are made from petroleum-based paraffin, some of which were found to contain lead — although at a level deemed safe for toys. Soy crayons provide an alternative. They were invented by Purdue University student Jocelyn Wong and her team as part of a soybean innovation competition. The team wound up selling the rights to a manufacturer, which still produces them. They contain 85 percent soybean oil and are available in different size packages, just like regular crayons. Soy crayons glide smoothly, don’t flake and are vibrant and bright. They’re also environmentally friendly, non-toxic and made from a renewable source. A variation is the soy crayon rock, created by a former special education teacher. She wanted to create something that would help special needs children develop their fine motor skills. The shape of the “rocks” encourages kids to use their thumb, index and middle fingers — called a tripod grip.