Between the Aye-Aye, raccoon and others, these five animals thrive in the dark. 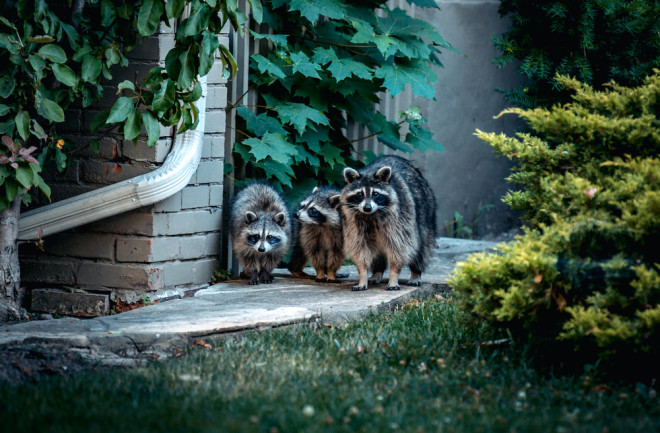 Almost 70 percent of the world’s animals are nocturnal — and for good reason. It’s cooler at night, easier to avoid detection by predators, and there’s less competition for food. Most nocturnal animals have some special adaptations, including a highly developed sense of smell and hearing. Some have large eyes that can see well in low light, while others don’t rely on the sense of sight.

Nocturnal animals use the nighttime hours to hunt, eat, mate and play. Let’s take a look at five animals that are busy while most of us are sleeping.

Native to Madagascar, the aye-aye is a type of lemur that spends most of its life in tree canopies — eating, sleeping and mating. They also spend 80 percent of their nighttime hours foraging for food and can travel over two miles on their quest. Although they have rodent-like teeth (with incisors that never stop growing) and squirrel-like tails — they’re actually primates.

In fact, they’re the largest nocturnal primate in the world. Locals in Madagascar kill many aye-ayes, due to the myth that they bring bad luck. Now endangered because they’re hunted for bushmeat and due to habitat loss, it’s believed there are less than 10,000 left in the world today, maybe even as little as 1,000.

Hedgehogs are popular pets, though there is much to take into consideration before getting one. Being nocturnal presents certain challenges, like the fact that they typically wake up between seven and nine at night. This gives owners a relatively short window of time for bonding, as most people are sleeping while their pet hedgehog is most active.

In the wild, they can travel up to eight miles each night while searching for food. This is why some hedgehog owners have wheels for them to run in. They love to sleep and are only awake an average of six and eight hours a day. Wild hedgehogs typically live under hedges and bushes, foraging for grubs, roots, fruits and small vertebrates like frogs to eat.

Of the approximately 20 species of armadillo, the nine-banded is the only one that can be found in the U.S. About 2.5 feet long and averaging 12 pounds in weight, they can have anywhere between seven to 11 bands (despite their name). These nighttime insectivores dine on grubs, termites, beetles and worms. Nine-banded armadillos are the only species to have been connected to leprosy, also known as Hansen’s disease.

It’s not common, but there have been confirmed cases of animal-to-human transmission. Another unique thing about the nine-banded armadillo is that when they give birth, it’s almost always to four babies, which are identical quadruplets. When startled, they can jump up to five feet in the air.

There’s a myth that if you see a raccoon out during the day, it must have rabies. While not necessarily true, daytime activity by raccoons could be a sign that something is wrong. Raccoons are a common rabies carrier in the U. S., but there’s only one known case of a person dying from raccoon rabies.

Another misconception is that they “wash their food." In actuality, they wet their food to increase their sensory information. Raccoons gather two-thirds of their data from touch sensations. Wetting their paws activates their nerve endings — thereby enabling greater tactile senses. With seven species of raccoons in the U.S., they vary in size from 12 to 35 pounds. Raccoons are strong swimmers and good climbers, able to climb down a tree head first.

Like all nocturnal animals, sugar gliders eat at night. However, they don’t spend much time hunting. Instead, they’re opportunistic feeders who will eat lizards, small birds, fruits, seeds and nectar. Their diet also includes insects, but rather than expend a lot of energy foraging for them, they wait until the insects fly into their area. Another way they obtain nourishment is by stripping bark off trees to get to liquid that may be inside.

Sugar gliders are social and live in large groups in the wild. They’re able to glide thanks to a web of skin-like membranes called a patagium, located between their front and back legs. They steer by adjusting the tension of the patagium and moving their limbs according to which way they want to turn.