5 Animals That Don’t Die Right Away

What do chickens, octopuses and tortoises all have in common? An uncanny ability to delay death. 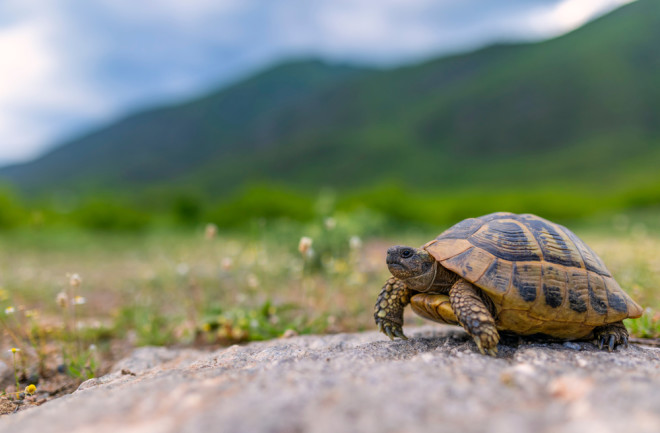 The Turritopsis dohrnii is a tiny jellyfish that can age backward. When their survival is threatened by injury or starvation, they will transform themselves into a polyp — an early stage of development. Eventually, the polyps will bloom back into genetically identical jellyfish.

Death will come for us all; however, the T. dohrnii isn't the only animal that can delay it. Several animals continue moving or functioning briefly — after what seems like certain death.

In 1945, a chicken named Mike lived for 18 months after a botched beheading. Mike's owner didn't cut low enough on the chicken's neck, which left some of his brain stem intact, enabling Mike to continue his life. The owner named him and cared for Mike until he died.

While Mike's long life without his head was an anomaly, chickens are known to continue flapping their wings and running after losing their heads. Decapitation triggers the nerve endings in their neck and sends electricity through their nerves into their muscles — prompting them to move. Furthermore, if their head isn't removed below the eyes, part of the brain will remain, allowing them to breathe and maintain motor functions.

With about 500 neurons, the octopus matches brain power with a dog. They have nine brains, including a central one in their head and a smaller one in each limb. Because of their neural activity, the limbs will continue to squirm or move and respond to stimuli for up to an hour when removed.

Octopuses are semelparous, meaning they only mate or reproduce once in a lifetime and then die. Males die within a couple of months of mating, while females live until they lay their eggs — at which point they stop eating and have also been known to mutilate themselves.

They say if there was a nuclear war, roaches would be the only thing to survive. That's because they can thrive in conditions other organisms can't. They will eat just about anything; can survive in temperatures as high as 120 degrees or as low as 15 degrees; and can go for long periods without food or water.

Their endurance extends even after decapitation. A roach's body can survive for up to two weeks without its head. They don't have a complex system of blood vessels, so when they lose their head, the neck clots itself off, and they won't bleed to death. The body can still move, stand and react. Their heads can also survive after separation from the body, moving their antennae for hours.

You may think a decapitated snake wouldn't be a threat, but when a Texas man decapitated a diamondback rattlesnake with a shovel, he got a nasty shock. As he went to throw out the head, it bit his hand, almost killing him with a massive amount of venom. While it sounds like something out of a zombie movie, it really comes down to a snake's physiology.

Snakes are cold-blooded animals called ectotherms, which rely on external sources to regulate their body temperature. Because they require less energy and oxygen, their brains can survive longer and continue to move and even attack after their head and body are separated. Conversely, warm-blooded animals experience cell death quickly after decapitation due to loss of oxygen.

Turtles have slow metabolisms, which helps to sustain their organs for long periods and makes their long life spans possible. They need little food, and their slow movements don't expend much energy. Their brains require small amounts of oxygen and can function for days, weeks and possibly longer without oxygen.

In a 17th-century experiment, Italian physician Francesco Redi removed a tortoise's brain. It lived for six more months. Redi then removed the tortoise's head; shockingly, it remained alive for almost another month. This has led researchers to believe that tortoises' movements are controlled by muscle memory. Another unusual feature of turtles is that their hearts will continue beating for up to 12 hours after removal from their body.