The amount of skin indicates how muscular the hadrosaur was and, consequently, how fast it could run. 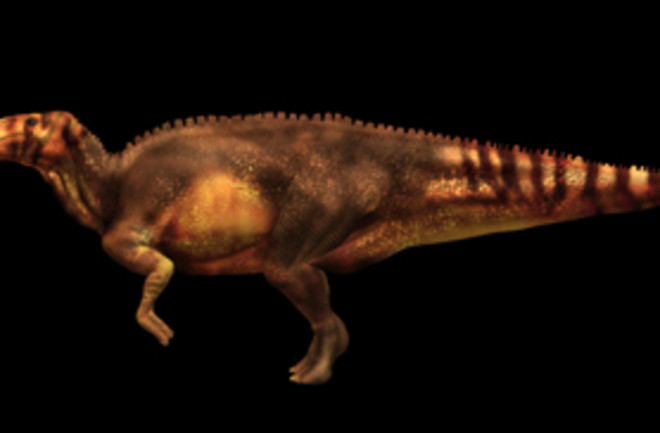 In 1999, while fossil hunting in the Badlands of North Dakota, 16-year-old Tyler Lyson stumbled upon a mummified dinosaur: not just a skeleton, but a fossil that turned out to include naturally preserved soft-tissue structures. This year a group of scientists published the first in-depth analysis of this rare find from 67 million years ago.

The dinosaur—a hadrosaur, or duck-billed plant-eater —apparently died in a soggy spot. Minerals precipitated rapidly in its skin, forming a replacement framework before the soft organic tissues decomposed. “We actually have a three-dimensional organism preserved,” says study coauthor Roy Wogelius of the University of Manchester in England. Scales are visible to the naked eye; more remarkable, electron microscopy reveals double-layered skin similar to that of modern animals, and possibly even the outlines of cells. Wogelius, a geochemist who analyzes mineral surfaces, was asked to apply his expertise in infrared imaging to the fossil, nicknamed Dakota. He found that its mummified remains appear to include some of the creature’s original amino acids, although there are no traces of whole proteins or DNA. The results were published online in July in Proceedings of the Royal Society B.

The generous surface area of Dakota’s skin suggests that there was a lot more muscle packed into the animal’s tail than previously believed. On the basis of the new information, researchers now estimate that this hadrosaur could have run roughly 27 miles per hour. That is “a lot faster than a T. rex,” Wogelius’s colleague Phil Manning says.

Manning suspects that skin and soft tissue may have been overlooked in other fossils and that they could yield startling new insights about ancient creatures. “I think there are specimens in museums today that are time capsules,” he says. “We could go back to these specimens and breathe new life into those old bones.”