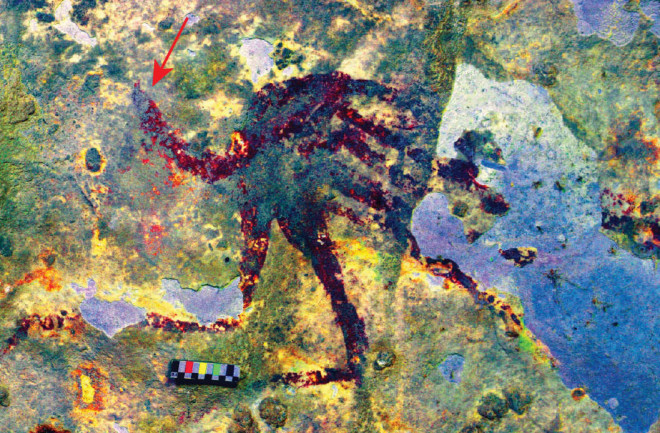 Late Pleistocene rock art panel from Leang Bulu’ Sipong, on the Indonesian island of Sulawesi. It's been dated to at least 43,900 years ago. (Credit: A. Brumm, A.A. Oktaviana, R. Sardi)

A scene of what appears to be boars, wild cattle and humanlike figures is the oldest lifelike figure cave art we have found yet. Adorning the back wall of an Indonesian cave, the almost 15-foot panel is likely over 44,000 years old. And, say the researchers who found them, the illustrations might also represent the oldest evidence we have of our ancestors telling stories through drawings.

The eight somewhat-human illustrations also boast bits of animals, according to the researchers' interpretation of the find, which they lay out in a new paper in Nature. One has a crocodile-like lower half, another is part reptile, part human and part steer. These fantastical creatures might be hunting the larger animals in the picture, the Australian and Indonesian research team thinks.

“No doubt some will challenge our interpretation of this cave painting, but the same goes for every prehistoric rock art image in the world,” writes co-author Adam Brumm, an archaeologist with Griffith University in Australia, via email. “We'll never know what the artists meant by creating these images, [or] exactly what it is they were attempting to portray.”

An illustration the researchers describe as a human with a muzzle-like head. (Credit: Brumm et al./Nature)

The site of this illustration, hills of limestone called Maros–Pangkep on the Indonesian island of Sulawesi, first drew researchers with reports of cave art in the 1950s. Since then, archaeologists have clambered up the hills searching for crevices with unique paintings. Brumm and his colleagues reached this particular cave in December 2017.

The team interpreted the drawings as wild pigs and anoa, a kind of dwarf buffalo, being hunted by the partial humans. One appears to be roping or spearing a pig, and six others seem to be teaming up on a buffalo. If that is what’s truly going on in the painting, it's an indication the humans (likely Homo sapiens) living in this region at the time actually hunted wildlife, the authors write.

The researchers dated the illustrations to at least roughly 44,000 years ago by taking samples of mineral deposits that had built up over them. Some of the half-human beings are only an inch-and-a-half tall. “They would have required some precision to paint,” Brumm says.

This hunting scene means humans were interpreting their lives through a kind of story with multiple characters roughly 20,000 years earlier than thought. Better yet, the human-animal hybrid creatures are reminiscent of similar beings in the art of more modern cultures. These cave paintings, like their more recent counterparts, could hint at a sense of fiction or spirituality.

Inside the cave where the paintings were found, high up on a back wall. (Credit: Kim Newman)

Some figures are too damaged to discern. That’s a problem plaguing a number of caves in Sulawesi. Researchers have noticed the paintings are peeling off the walls, but they don’t know why or how. Without more investigation into how this is happening, there’s no way to know what other similar, or even more profound, art from our ancestors is chipping away.

“Who knows what other amazingly old images that could change our understanding of human evolution are out there now in undiscovered caves in Indonesia,” Brumm says, “peeling away as we speak.”