Water-based rain has fallen on Earth for at least 2.7 billion years and is a building block of life. 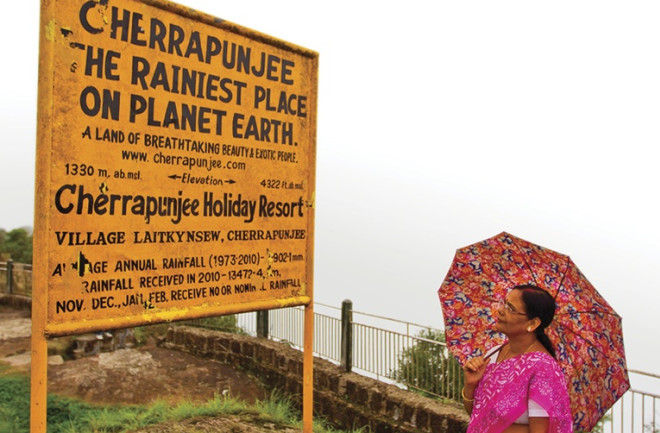 When it rains, it pours in the Indian town of Cherrapunji, which since 1861 has held the world record for rainiest 12-month period. (Credit: National Geographic Creative/Alamy Stock Photo)

1. Rain reigns over us: It’s the main way liquid water, necessary for all earthly life-forms, disperses across the planet.

2. But a 2015 study in Nature Geoscience concluded Earth’s early rain was made of iron. More than 4.5 billion years ago, bits of space rock vaporized upon impact with our still-forming planet, rose up in plumes of rock and iron, and then fell back down as rain.

4. Acid rain, while still water, leaves a different kind of imprint on many surfaces, corroding metal and eroding limestone and marble. The term, coined in the mid-19th century, typically refers to precipitation with a pH of less than 5.2.

5. Normal rain, by the way, is still slightly acidic, with a pH of about 5.6. The pH value of rainfall varies slightly due to factors such as season and climate.

6. Acid rain can occur naturally after volcanic eruptions, forest fires and other events that release sulfur dioxide into the atmosphere. The compound dissolves in rainwater and oxidizes into sulfuric acid.

7. Unnatural acid rain poses larger environmental threats, such as deforestation. Since the Industrial Revolution, fossil fuel burning has released sulfate and nitrate ions — both acid rain precursors — into the atmosphere at unprecedented levels.

8. Today, the northeastern U.S. sees the most acid rain in the country because of density of both people and industry, as well as prevailing winds.

9. Acid rain is bad enough, but on Saturn’s moon Titan, the rain is made of methane. Nobody is singing in the rain there.

10. On Saturn itself, as well as Jupiter, droplets of helium rain may fall from the gas giants’ outer layers toward the interior, according to research published in 2010 in Physical Review Letters.

11. But nowhere on Earth, Saturn or anywhere else has it rained cats and dogs. There’s a flood of theories about the origin of the popular saying, which was first recorded in the mid-17th century.

12. Some etymologists think the phrase refers to dead animals washed into the streets after a downpour. But others see a possible corruption of the Old English word for waterfall, catadupe, which makes more sense than falling Fidos and Fluffys.

13. It rains some serious catadupe in Cherrapunji, India. The weather station there holds the world record for the heaviest 48-hour rainfall (more than 98 inches), set in 2014.

15. The folks in Cherrapunji might be tired of it, but many people enjoy petrichor, the scent that often follows rainfall. Two Australian researchers coined the term back in the 1960s.

16.A U.S.-based team working at about the same time identified geosmin, a byproduct of soil bacteria, as the source of earthy notes in the distinctive smell.

17. Researchers discovered the likely mechanism behind petrichor only in 2015: A study in Nature Communications found that the average raindrop hits a porous surface with enough force to trap air bubbles at point of impact. The bubbles then rise and pop, releasing aerosols, including geosmin.

18. Many people find the sound of rain as pleasant as its smell, but a 2016 study determined it’s also possible to measure rainfall amounts over oceans by monitoring the sound of droplets hitting the waves.

19. And quantifying oceanic rainfall, notoriously difficult to do, is important: 80 percent of the planet’s precipitation lands there.

20. Since Earth’s water cycle is essentially evaporation from the surface, condensation in the upper atmosphere and precipitation (gravity sending that condensation back down), those little droplets are really just going home.