Doors injure 300,000 people a year — not to mention the "Door to Hell." And what's up with trapdoor spiders? 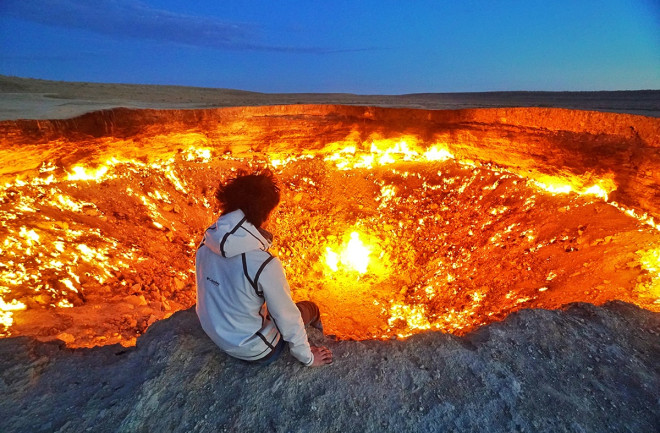 1. Have you ever stopped to consider the door? This most mundane of architectural elements might surprise you. For example, humans are not the only species to construct doors.

2. Aptly named trapdoor spiders have evolved some spectacular ambush hunting techniques. The arachnids make doors for their burrows out of dirt and silk, camouflaged with leaves and other material. The doors even have hinges.

3. Some trapdoor spider species spin additional silk lines around the door to function as tripwires when prey wanders past.

4. Others simply crack open the door and wait for a tasty meal — insects, other spiders, even small lizards and frogs — to come within striking range.

5. The burrow doors can also be used for defense. If threatened, the spider may retreat into its burrow and “lock” the door by gripping it with its front legs and pedipalps, the set of appendages nearest its mouth.

6. Doors may not seem particularly dangerous, but the National Safety Council reports about 300,000 people are injured by them each year, just in the U.S.

7. There are no reliable stats on how many people were hurt or killed by Porte des Morts: Death’s Door, an evocatively named rocky strait that connects Lake Michigan to Green Bay along Wisconsin’s coast.

8. A combination of strong winds, swift currents and rocky hazards made the narrow passage one of the most treacherous Great Lakes waterways during the 19th century. Between 1872 and 1889, according to a local lighthouse keeper’s journal, the strait claimed an average of two vessels per week.

9. Today, Death’s Door is a popular scenic spot in Wisconsin’s Door County, a name descended from the once-perilous passage.

10. The modern word door itself descended from Old English’s duru, closely related to its word for gate: dor. In some languages, including Mandarin, the same word is used for door and gate. (That would be men, if you want to add some Chinese to your vocabulary.)

11. In physics, you’ll see the term “doorway state” across several subfields. It’s a key theoretical concept in everything from studying nuclear reactions to figuring out how seismic waves travel through sedimentary basins.

12. Like an open door that allows easy passage, the doorway state facilitates energy transfer and other processes, and can help explain sometimes-unexpected outcomes.

13. Other doors can be unexpected opportunities. Take Turkmenistan’s Door to Hell, for example. For decades, this natural gas field — set in a collapsed cavern formally known as the Darvaza gas crater — has been ablaze.

14. Thanks to Cold War-era secrecy, exactly how and when the Door to Hell opened remains uncertain. According to most sources, engineers intentionally ignited the gas field in the 1970s in hopes of quickly burning off a potentially deadly methane leak.

15. The fire is still going strong, but whatever its origin, the Door to Hell is giving astrobiologists a glimpse of what extraterrestrial life in extreme environments might look like.

16. Researchers recently collected soil, sand and rock samples from in and around the site, and found multiple types of bacteria, some of which are unique to the crater.

17. Other bacteria that call the Door to Hell home appear to be related to species found in geothermal soils in volcanic regions of New Zealand. Life, you know, finds a way.

18. There’s no way through a false door if you’re alive, however — at least, that’s what ancient Egyptians believed. More than 4,000 years ago, they began carving ornate reliefs that resembled doors in tomb walls to allow the deceased’s ka, one aspect of the soul, to come and go between worlds.

19. By the time Egyptian false doors came into vogue, a wooden door in what’s now Switzerland was already old. Researchers used dendrochronology — dating events by growth rings in trees — to figure out the age of the waterlogged door unearthed near Lake Zurich.

20. Patterns in preserved timbers revealed the door was more than 5,000 years old. There’s so much more to say about doors, but as The Doors frontman Jim Morrison sang, “This is the end, beautiful friend.”