Where to begin? Our relationship with our feline friends goes back some 9,500 years! 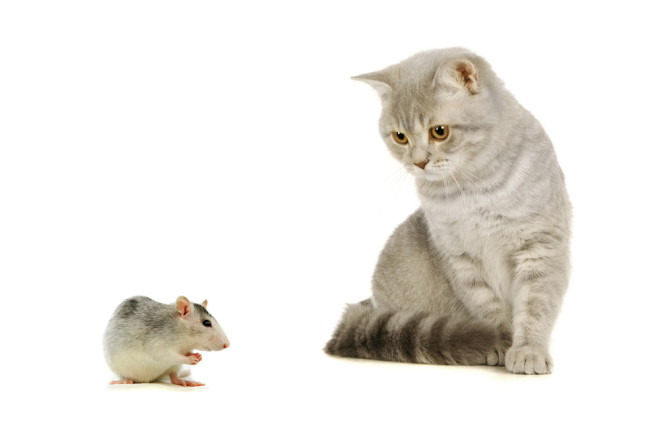 1. Your kitty’s ancestor was a solitary hunter of small prey, as opposed to dogs’ ancestors, which were large-game pack hunters. That’s why Rover tends to gulp down a big meal while Mittens prefers to eat several smaller meals throughout the day.

2. Cats will hunt even if they’re not hungry. The University of Georgia’s KittyCam project, which outfitted 60 free-roaming pet cats with video cameras, found that only 28 percent of the prey caught was consumed. Half of the kills were simply left in situ — the rest were brought home to lucky owners.

3. Evolved for low-light hunting, cats’ eyes are proportionally enormous. In Cat Sense, John Bradshaw explains that their eye size makes focusing between near and far so difficult that the muscles develop with an environmental bias. Outdoor cats tend to be farsighted, while most indoor cats are nearsighted.

4. Nearsighted, but not close-sighted. Because their eyes are so large, cats can’t focus on anything less than a foot in front of them — but their whiskers can swing forward to feel what they can’t clearly see.

5. Whiskers will only get you so far. Cats also have an excellent sense of smell. In a 2010 study from Australia’s University of New South Wales, feral cats were attracted to patches laced with a little Eau du Mouse six days after the scent was placed.

6. The vomeronasal organ helps cats detect minute chemical clues about their environment, including the proximity and status of other cats.

7. Cats’ sense of taste is not so impressive, though: They’re one of the few mammals that lack taste receptors for sweetness, according to a 2006 study.

8. That’s probably because cats need meat, not sweets. Cats are obligate carnivores that get their energy from protein rather than carbohydrates.

9. Mittens’ meat-loving ways informed research, published in January, on the bones of two 5,300-year-old cats from China. One of the cats had a millet-rich diet — a clue that humans were likely feeding the animal, said researchers, and evidence of domestic cats in China much earlier than previously thought.

10. That ancient cat may not have been a pet, however. In March, other researchers claimed the Chinese cats were not domesticated, but rather commensal — in a mutually beneficial relationship with humans yet independent.

11. Whether pet or not, those Chinese cats — like all domesticated cats — were descended from a wild cat, Felis silvestris lybica.

13. The earliest archaeological evidence of our relationship with cats is a kitten buried beside a human on the island of Cyprus about 9,500 years ago. Boats were too small for stowaways back then, so researchers say the cat must have been brought there purposefully.

14. Cats and sailors have had a long relationship: For centuries, felines have been kept on ships for rodent control and as good luck charms.

15. Those seafaring kitties left their mark. More than 10 percent of cats in coastal cities from New England to Nova Scotia have extra toes (polydactyly). Given the cities’ historical trade networks, researchers believe that this high incidence of the normally rare mutation resulted from a few polydactyl merchant-ship cats taking shore leave as far back as the mid-18th century.

16. A different kind of merchant cat, the world’s richest cat is arguably Japan’s big-headed cartoon Hello Kitty, which earned more than $1 billion in sales and royalties in 2012.

17. According to several studies, psychologists believe Hello Kitty’s appeal is based on kawaii, or cuteness. Hello Kitty’s wide-set eyes and mouthless face convey the character is non-threatening and needs loving care.

18. Not quite as kawaii as Hello Kitty, a painting of a collar-wearing cat found in a 4,400-year-old tomb in Saqqarah, Egypt, is the oldest known image of a domesticated cat.

20. The open-access, cloud-based 99 Lives database will be used to research both feline diseases and some human ailments, including diabetes, which affects cats similarly — and for which we share risk factors such as a sedentary lifestyle. You’ve come a long way, F. s. lybica.