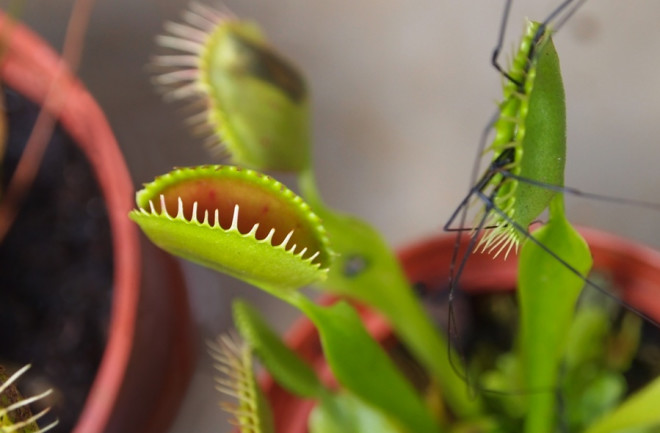 1 Charles Darwin was a big fan, particularly of the sundews, or Drosera. “It is a wonderful plant, or rather a most sagacious animal. I will stick up for Drosera to the day of my death,” he declared in a letter to botanist Asa Gray in 1863.

2 Sundews get their name from glistening, sticky, hairlike trichomes, which secrete enzymes that digest insects unlucky enough to get stuck.

3 The adaptation of trapping and digesting prey has arisen at least nine times in different plant families in response to soil lacking the nutrients nitrogen, phosphorus and potassium.

4 The 600 or so carnivorous species on the planet today thrive in places where other plants struggle, including bogs and heaths.

5 Fairly common Geranium viscosissimum is considered protocarnivorous: Its enzymes can digest protein, but it lacks a trap.

6 Traps are specialized leaves and vary widely among species, from a pitcher plant’s cup-shaped trap to the snapping taco shell of a Venus’ flytrap.

7 The Venus’ flytrap may be the most famous plant carnivore, but Utricularia, or bladderworts, are the most widespread, found on every continent except Antarctica.

8 Utricularia have multiple tiny structures shaped like bladders, each with a single watertight, trapdoor-like entrance.

9 Aquatic bladderworts are the fastest carnivorous plants. When passing prey trip the bladder’s “trigger hairs,” the trapdoor opens so quickly that the change in pressure sucks the prey inside.

10 Taking just a few milliseconds to open and close, the bladderwort’s speedy trap was not fully documented until 2010, when researchers captured the process using high-speed video.

11 Carnivorous Genlisea use “lobster pot” traps: narrow tubes lined with inward-curving hairs. Once prey wanders in, it can’t back out. It can only continue to its doom in the digestive chamber.

12 The prey of choice for plant carnivores are typically arthropods, though remains of amphibians and small mammals have been found in some larger pitcher plants.

13 The largest carnivorous plant is Borneo’s Nepenthes rajah, whose beyond-Big Gulp-size pitcher can hold more than a half-gallon of fluid.

14 Although it will digest the occasional animal that falls in and drowns, N. rajahevolved to eat poop.

15 Tree shrews and rats are attracted to nectar secreted by N. rajah’s pitcher lid. The animals sit on the pitcher rim and defecate into it, providing the plant with nutrients.

16 The small insect Pameridea, which lives only on South Africa’s carnivorous Roridula, eats other bugs trapped by the plant’s sticky trichomes and then excretes nutrients that Roridula needs.

17 The oldest carnivorous plant leaf fossil, from a relative of Roridula, was found in Baltic amber that’s 35 million to 47 million years old.

18 Carnivorous plants can still be found in the Baltic — and much farther north. Butterworts, or Pinguicula, thrive above the Arctic Circle.