Some are slaveholders, others sip blood and a few jump backward like nobody’s business. 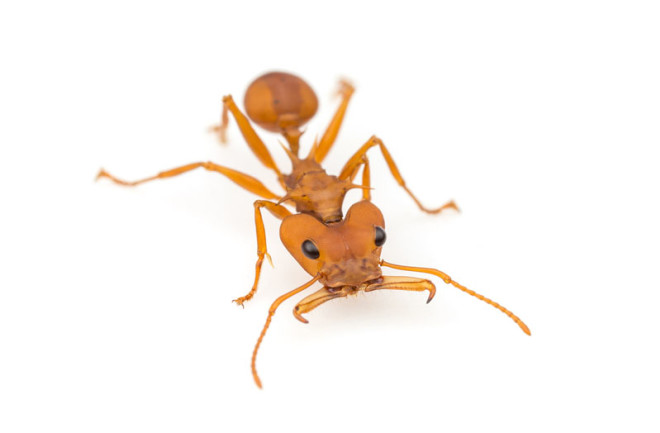 1. At home on every continent but Antarctica, the ant family, Formicidae, has more than 15,000 species.

2. Their habitats range from rainforest canopies to the Sahara Desert, with most ants living in hierarchical colonies with a single egg-laying queen. Males’ sole job is mating, and female workers do everything else.

3. Ants may be stereotyped as picnic pests, but they’re an important cleanup crew: A 2014 study of New York City streets estimated that every year, arthropods pick up the equivalent of 60,000 hot dogs in dropped food waste just along the road medians of 150 city blocks.

4. Sometimes ants end up on the menu themselves. When in Colombia, try the delicacy hormigas culonas(literally “big-bottomed ants”): fertilized queens of a large leafcutter species, served brined and toasted.

5. Considered an aphrodisiac, the crunchy queens are given as wedding gifts there, as well as in Venezuela.

7. We don’t recommend rubbing your body with ants, but if you do, watch out for the formic acid found in the venom of many species, including fire ants.

8. Naturally antimicrobial, formic acid is good for more than giving bites and stings their zing, whether you’ve got six legs or two: Humans put it in laundry detergents and hand soaps, while wood ants mix it with tree resin to create a kind of hygienic paint for their nests.

9. A tidy nest takes lots of work, and around 60 species of ants “enslave” other species to do their bidding, often by stealing brood and raising them as their own workers. But sometimes slave ants revolt, attacking their overlords, attempting to mate and lay eggs, and even making a run for freedom.

10. “Dracula ants,” a range of species found across the world, earn their name by drinking the hemolymph (essentially, ant blood) of their own larvae — but without killing them.

11. The queens of one such species, Stigmatomma silvestrii, seem to survive solely on the lifeblood, or at least the hemolymph, of the young.

12. If you’ve ever squashed the “odorous house ant,” a common intruder of North American homes, your nose will know. When smooshed, the ants release a chemical from the same family of methyl ketones that gives blue cheese its distinctive funk.

13. The Kaingang tribe of Brazil wouldn’t dream of squishing an ant. They believe their ancestors’ spirits go on to live another life in the form of these humble arthropods.

14. Speaking of ancestors, a 100 million-year-old piece of amber found in Charente, France, contains the oldest ant fossil ever found.

15. The ants don’t always go marching. Tree-dwelling Melissotarsus can’t walk on flat surfaces. The widespread but elusive African ants evolved a middle pair of legs that projects upward rather than downward — awkward for flat surfaces but perfect for navigating the tunnels they dig for their nests.

16. While walking is off the table, spinning isn’t. Melissotarsus workers are the only ants that can spin silk, which they use to seal their tunnels.

17. Trap-jaw ants are quite the acrobats. In addition to jumping forward, members of at least one species can also catapult themselves backward by quickly snapping shut their spring-loaded jaws on a hard surface, propelling themselves over 100 times the length of their body.

18. Also going to great lengths: Researchers have documented Argentine ants forming supercolonies around the world. Ants in these massive, interconnected nests collaborate rather than compete with other colonies.

19. The largest supercolony ever found spans roughly 2,500 miles. It follows first the Atlantic coast and then the Mediterranean, from northwestern Spain to northern Italy. Researchers estimate the supercolony’s population boasts tens of millions of queens, and worker ants in the billions.

20. Ants from a nest in Portugal that’s part of this super-supercolony are just as friendly to each other as they would be to their supercolony compatriots in France. That sounds like a social network we can all learn from.