Scientists discovered many new species in 2022, and 20 new frog species is quite a number. There’s probably a lot more out there, waiting to be discovered. 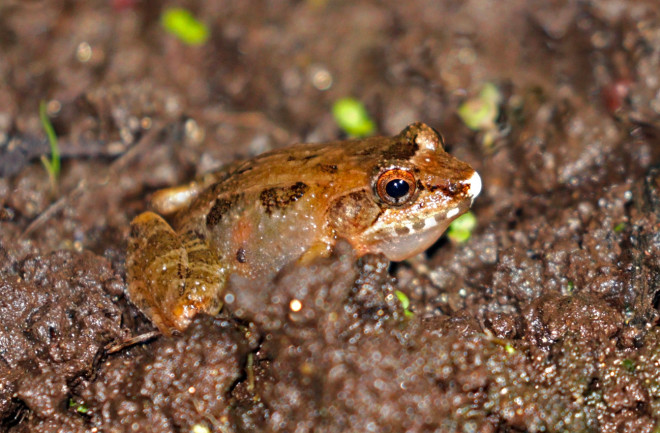 The humid vegetation alongside the streams of Madagascar is populated with puny, brown frogs. If you’re quiet, in the dark, they will fill the air with subtle mating calls that sound like the earth itself is gurgling; like the cracking open of a creaky door; or like the clinking of two empty glasses.

With your eyes, however, the frogs may be hard to spot — they camouflage themselves with mud — and even harder to accurately tell apart.

In fact, until recently, scientists had only formally described 14 different species of the Malagasy common brown frog (Mantidactylus subgenus Brygoomantis). Now, after poring over the results from 30 years of fieldwork, scientists have named and described 20 additional species of frogs that had been previously overlooked — paving the way for many more frog discoveries in the future.

“Biological diversity is on everybody's minds at the moment, but we don't really know what biodiversity is until we have fully understood which species are around,” says Mark D. Scherz, curator of herpetology at the Natural History Museum of Denmark and a lead author of the study that details these findings. “Putting a name on a species allows us to collect data about it, cataloging just how much diversity there is.”

Filling in these blanks in the biological inventory of Earth is more crucial for our understanding of the planet’s biodiversity now than ever before, as large-scale habitat destruction causes animals to die out at a rate that is faster than we can categorize them.

“It's exciting in the good sense, thrilling because we're discovering new diversity. And that is always just such a privilege,” Scherz says. “But it's also exciting in the scary sense, because we are doing this in the face of widespread deforestation in Madagascar.”

New Species that are Unfrogettable

Madagascar doesn’t have any toads, salamanders or newts, but it is home to hundreds of different species of endemic frogs. Back in 2009, a massive categorization of amphibians in the island revealed that the 244 Malagasy frog species known to science were probably just half of the total diversity that could be found. But actually studying them and collecting detailed data about their biology and ecology is quite complex, Scherz notes.

On the one hand, carrying out fieldwork in many of the island’s remote and inaccessible areas is tricky, making it that much more difficult to track down Malagasy frogs in the wild. “Madagascar is the fourth-poorest country in the world, and the fourth-largest island in the world,” Scherz says. “You're talking about massive tracts of land that have extremely poor accessibility levels.”

And on the other hand, a lack of adequate technology has made it difficult to extract helpful data from frog specimens already in national collections and museums — like recordings of their mating calls or genetic information. “[We]’re constantly having to reference individual organisms, like a single frog, collected by some people on an island off the coast of Madagascar in 1876,” Scherz says.

But you can only match new frogs with old frogs according to what they look like, which is an exceptionally complex feat for many of the species who look quasi-identical, even to experts. “You could maybe hear a difference in their advertisement calls,” says Scherz. “But a 150-year-old frog is not about to be calling anytime soon.”

To come up with a more accurate classification of all the different species of common brown frog in Madagascar, Scherz’s team used a newer, state-of-the-art approach called museomics. “We're basically extracting and sequencing DNA from material that was not preserved to give us DNA,” he explains. “It was just preserved to maintain the physical morphology because that was all we thought about at the time. We didn't know that DNA was a thing in 1880.”

Then, that genetic data is mixed and matched with other information from over 1300 frogs: pictures of what they looked like in the field, what they look like now, recordings of what they sound like, their measurements, where they live, what they have been observed behaving like, and so forth.

Read More: These Tiny Frogs Traded Their Sense of Balance for Their Size

As a result, the international team of researchers have been able to identify 20 additional species, though they might all look similar to the untrained eye. They are, with rare exception, brown with slightly bumpy skin and a stripe down the middle — and in some groups, a bright white spot on the front of the snout, “which is quite striking,” Scherz says. But having access to a diversity of granular data about them allows scientists to better tell them apart.

For example, we now know their advertisement calls are specific to the species. Additionally, some groups have become much more aquatic than others, with remarkable adaptations to show for it.

“They have a flatter, shorter snout, and the eyes are kind of moved up on top of the head. They have a more splayed posture when they're sitting still,” Scherz says. “They really look like cartoon frogs. If someone were to draw a cute frog, that is exactly what a cute frog would look like.”

It’s an exceptional example of how quickly our understanding of the natural diversity of life is expanding, says Darrel Frost, a curator emeritus of herpetology at the American Museum of Natural History who was not involved in this research.

“Once molecular data became cheap, there was a general realization that human perception of ‘kinds’ of organisms didn’t really reflect how evolutionary lineages existed in real life,” he says, adding that it wasn’t that past scientists got things wrong so much as the answers were deeply incomplete. “The field needs more work like Scherz’s.”

New Species are Relatives of Relatives

In some cases, the new paper goes as far as describing different subspecies. But the idea of subspecies can be controversial among ecologists, because it has long been unclear what exactly they are supposed to represent.

Now, an emerging school of thought believes subspecies should be categories of animals that are very closely related genetically but are beginning to take different evolutionary pathways — as if they were at the start of their evolutionary crossroad.

The ambohymitombi species, according to this international team of scientists, is a telling example of where this classification can come in handy. “It's a relatively streamlined spotted frog that is found originally from a location called Ambohimitombo,” Scherz says. “Then we had another group of frogs that we thought would be a completely different species. But when we sequenced them, it turns out that they are genetically almost identical, with 0.6 to 1 percent divergence, although morphologically totally different and from a different place.”

It’s unclear why something like this might happen, though the scholars hypothesize that this species is somehow in an early phase of divergence from ambohymitombi — and, therefore, classifying it as a subspecies is the most accurate way of describing it so far.

“It will be really interesting to see, over the next five years, how well this is received because there haven't been a lot of people who have been applying this reimagined concept of subspecies,” Scherz says.

Although this new classification is the culmination of a huge amount of fieldwork from a large team of experienced researchers, the researchers themselves believe there are several more species of brygoomantis frogs out there.

“We have just crossed 400 species of frogs in Madagascar, and we are far from being finished,” Scherz says. There are still large numbers of diverse frogs that haven’t been formally “discovered” — while these may have been spotted in the wild, and even collected, they don’t have names and there’s not enough data about what they actually are. And there are probably plenty more that have never even been seen before.