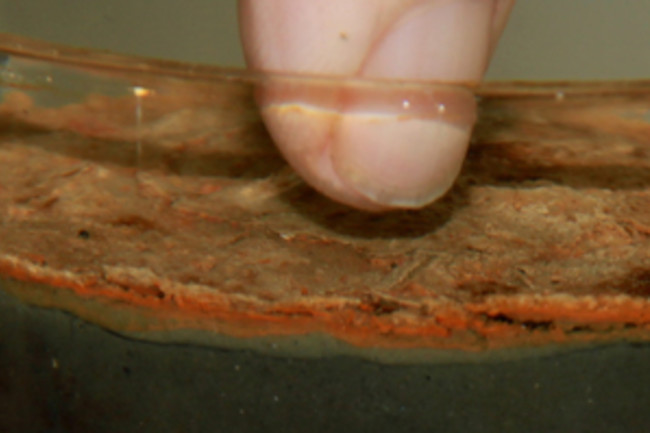 Even in a beaker, bacteria in ocean bottom sludge survive by sharing. | Nils Risgaard-Peterson

The ocean bottom is one of the world’s most important yet enigmatic ecosystems, covered in a thick sludge rich with bacteria that consume and recycle dead algae and animal feces. Somehow those bacteria get the essential oxygen they need to digest, even though very little of it should be able to penetrate the muck.

Last February, Danish biologist Lars Peter Nielsen stumbled on a possible explanation after his team at the University of Aarhus noticed activity in beakers of sludge set up for an experiment that had ended weeks earlier. The researchers measured falling oxygen levels at the surface of the sediment coupled with a disappearance of hydrogen sulfide (a food source to bacteria) a few centimeters below. “The oxygen and hydrogen sulfide were apparently interacting very closely and rapidly,” Nielsen says—even though microbial chemical interactions should not be able to traverse such a distance.

Nielsen believes the secret is a bacterial pulley system of sorts: Oxygen-processing bacteria at the top connect to digestive microbes below via long protein threads that transport electrons. “A bacterium may not rely only on its microenvironment and neighboring cells,” he says. “It may engage in a network with other bacteria living far away to share resources.”