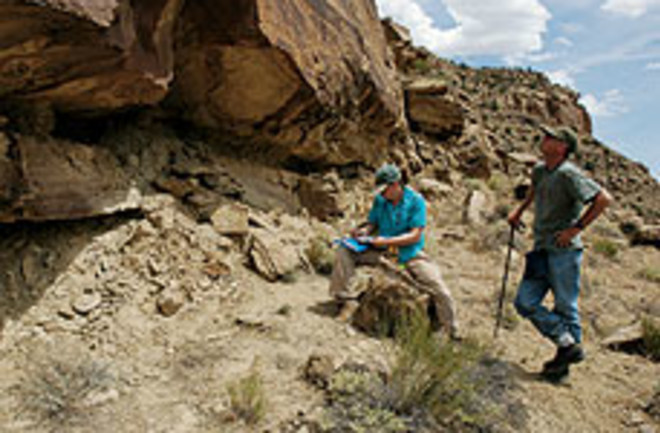 Shortly after Pearl and Ray Wilcox bought their 4,200-acre Range Valley ranch in eastern Utah’s rugged Book Cliffs region in 1951, they threw up a gate, ostensibly to protect their herd of Hereford cattle. Last June the world learned the real reason—and it was spectacular. They had been hiding hundreds of small, undisturbed Native American villages dating to the time of the Fremont, a collection of hunter-gatherers and farmers whose complex 1,000-year culture mysteriously ended along with much of North America’s agriculture 750 years ago.

The find could be one of the most significant discoveries in American archaeological history. Virtually untouched by modern man, the area includes villages of stone pit houses built halfway underground, rock shelters, cliff-side granaries still holding corncobs and wild grass seeds, and hundreds of colorful rock art panels—pecked out with a hand tool or painted—some predating the Fremont. Arrowheads, beads, tools, and pottery shards, many lying on open ground, are rare in situ clues in the Southwest, where ancient sites are often looted before scientists find them. “It’s a giant laboratory,” says Utah state archaeologist Kevin Jones. “It’s almost a self-contained ecosystem, and it gives us opportunities not only for archaeological research but lots of multidisciplinary approaches to the phenomenon of the Fremont and what ultimately happened to them.”

Nearly 50 miles off the nearest paved highway, the find was secured in part by its remoteness. Experts agree that other undisturbed archaeological troves are likely to be found on similarly inaccessible tracts—perhaps on Navajo reservations or military ranges—but they doubt any could equal Range Creek’s size and scope. So far about 300 sites have been cataloged in ranch meadows along Range Creek and in adjacent canyons and peaks, where researchers also found human remains exposed by erosion. “We have so far looked at less than 10 percent of the ground area,” says Jones. “There will be thousands of sites by the time we finish.”

Although the villages are a great find for archaeologists, Duncan Metcalfe, a curator of the Utah Museum of Natural History, suspects they will be underwhelming to tourists. “From a popular visitor perspective, the range is relatively unspectacular, whereas Mesa Verde and others that have been reconstructed for public visitation are boggling in their beauty.”

Investigators owe their tidy find to Pearl and Ray’s son, Waldo, 74. Preparing to retire in 2001, Wilcox sold the 12-mile-long property through intermediaries to Utah’s Division of Wildlife Resources for $2.5 million. For two years, all parties kept a lid on the deal while select study teams began an inventory. Then a local newspaper caught a whiff of the story, and it migrated rapidly to national news media and the larger scientific community. To protect against looting, the Utah legislature authorized $152,000 for security. “We have not had any significant damage occur,” says Jones, “and we’re going to work our tails off to see that we keep it that way.”