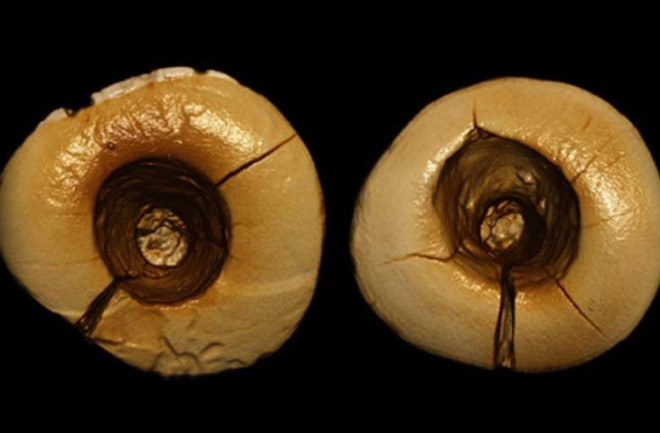 Going to the dentist may not be any fun today, but 13,000 years ago it would have been outright traumatic.

Before the age of painkillers, specialized tools and antibiotics, dentists used a variety of crude implements to ply their trade. A pair of incisors unearthed in Tuscany and recently analyzed by Italian researchers were hollowed out with sharpened rocks and stuffed with traces of bitumen and organic matter in what appears to be an early attempt at dental fillings.

The teeth were discovered two decades ago, but were only recently examined with more sophisticated tools, including scanning electron microscopy, microCT scans and residue analyses. Large pits bored into the teeth are a clear sign that some sort of operation took place, and further signs of wear on the tooth indicated that it happened while the patient was still living. Though the excavated hollows are empty now, researchers retrieved samples that hinted at the composition of the ancient fillings.

After infected pulp was cleared from the tooth — likely through an agonizing process of digging and scraping with sharpened stones — the prehistoric dentist packed the space with hair, vegetable fibers and bitumen (an oil derivative). Today, bitumen is used along with asphalt to resurface roads, and the viscous, sticky properties it’s known for would have perhaps worked well to fill in a cavity. Their findings were published in the American Journal of Physical Anthropology.

The researchers dated the teeth to between 13,000 and 12,740 years ago, a time period that they note predates the introduction of widespread agriculture. Once humans began cultivating grains and other carbohydrates, cavities and other dental problems appeared with much greater frequency. The carbs break down in our mouths into simple sugars that feed cavity-causing bacteria.

This isn’t the oldest example of dental work either. That honor belongs to another ancient Italian, a young man who died around 14,000 years ago with a drilled-out molar. He doesn’t seem to have benefitted from any sort of filling after the surgery, although the level of wear around the tooth indicated that he lived for some time with the excavation.

Other examples of prehistoric dental surgery include 11 molars from 9 different people in Pakistan dated to around 9,000 years ago, and a cracked canine from Slovenia around 6,500 years old that had been filled in with beeswax. The Pakistani teeth also show signs that a drill of some sort, likely using a bow design, was utilized during surgery. The Egyptians, too, made some early advances in dental science, using bits of gold wire to attach donated teeth to patient’s jaws, and the Mayans were known to use shells as replacements for lost teeth.

This newest find is the oldest example of a dental filling, however, and adds further evidence of prehistoric humans’ attention to dental health — although of the curative rather than the preventative variety.