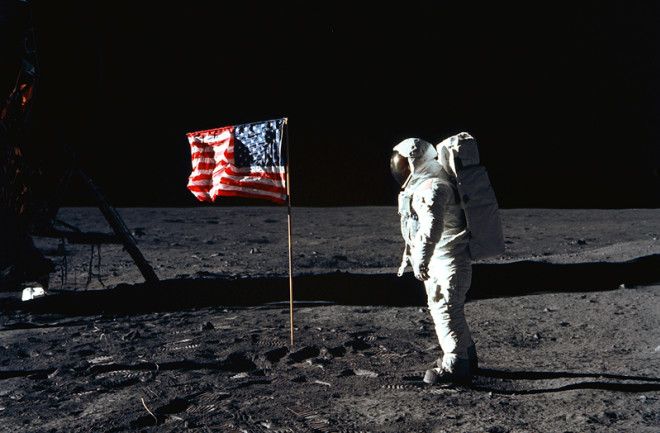 This year is the 45th anniversary of the Apollo 11 moon landing, the first time humans walked on the moon. The iconic imagery and audio from the mission is certainly seared into humankind’s collective consciousness, but there are a handful of side stories from the mission that are often overlooked. Here are some of the historical anecdotes that will change the way you remember man’s first foray on the moon.

Had the Apollo 11 moon landing gone horribly wrong, the world may have immortalized the words of William Safire, Richard Nixon’s speechwriter. You see, Safire had written a statement for Nixon to deliver in the wake of a hypothetical moon disaster. Rather than Neil Armstrong’s famous words, we may have committed an equally poetic phrase to memory: “Fate has ordained that men who went to the moon to explore in peace will stay on the moon to rest in peace.”

When Neil Armstrong took his first step on the moon, he actually meant to say “That’s one small step for a man.” People have argued whether a shoddy radio connection caused the misquote, or if Armstrong had a case of global stage fright and skipped over the tiny, but important, word.

8. Speaking of Those ‘First’ Words…

Armstrong gets all the credit for uttering the first words on the moon, but “That’s one small step…” wasn’t the first lunar sentence spoken — technically. Bob Berman, Slooh astronomer and author of Zoom, tells a different story that came out of an interview with Aldrin years ago. Berman says Aldrin was actually the first man to speak on the moon, but his quote wasn’t nearly as sexy. When the lander touched down, Aldrin simply said, “OK, engines stop.”

(For more insider stories about the Apollo 11 landing, be sure to tune into Slooh’s live webcast of the moon’s surface in HD — complete with commentary from Berman and other special guests.)

7. Armstrong Was Too Good a Pilot

Although it seems counter-intuitive, Armstrong landed the Eagle too softly on the surface of the moon. Berman says Armstrong was supposed to cut the engines when the lander was a few feet from the surface. NASA scientists built the lander with legs that would crumple upon impact to absorb the shock. Since Armstrong was such an ace pilot, the lander’s legs never crumpled. As a result, the astronauts had to exit the lander several feet higher than intended, which means that first small step was more of a leap.

Armstrong was the first human to step foot on the moon, but Aldrin holds the title as the first man to urinate on it. Upon stepping foot on the moon, Aldrin promptly emptied his bladder into his space suit’s internal urine collector. Unfortunately, Armstrong’s piloting skills came back to haunt Aldrin: when he made his higher-than-expected leap from the Eagle, his urine collector broke upon sticking the landing. As a result, one of Aldrin’s boots filled with pee when he relieved himself, Berman says. Fully aware that he was on a live radio feed, Aldrin kept that bit of information to himself.

Have you ever wondered what the moon smells like? When Aldrin and Armstrong, caked with moon dust, returned to the Eagle lander, they reported that the moon smelled a bit like wet ashes and gunpowder. Pressurizing the cabin upon their return was in itself a worrisome operation: some folks believed lunar dust was flammable, and would ignite as soon as it came in contact with oxygen. Luckily, that wasn’t the case.

We all remember that iconic video feed beamed to hundreds of millions of earthlings in 1969, but the video was actually captured in higher quality than we ever saw. That’s because the camera captured video in a format that commercial television stations couldn’t broadcast. NASA used a scan converter to adapt the video for U.S. broadcast signals, but by the time the images appeared on home television sets, the feed was substantially degraded.

However, thanks to technology, you can watch restored versions of the moon landing.

There are myriad things a moonwalker’s mother could worry about, but Neil Armstrong’s mom had just one real concern: that the lunar crust was too delicate and wouldn’t support her son’s weight when he walked on it.

2. What We Left Behind

Although every man on the Apollo 11 mission returned to Earth safely, they left plenty of artifacts back on the moon. Some items, such as a golden olive branch, American flag, Apollo 1 patch and a moon memorial disk, served a symbolic function.

But there was also plenty of junk left behind, including television cables, a camera, urine and defecation collection devices, tongs and a hammer to name a few. NASA has compiled a list of every single item the Apollo missions left behind on the moon.

Aldrin may have never had the chance to walk on the moon because NASA turned down his initial application to become an astronaut. He tried again, and was accepted in the third group of astronauts in 1963; he became known as “Dr. Rendezvous.”