Earlier this week, I was asked on Twitter why I had never blogged about the "neuro-myths" of Jo Boaler. I confessed I'd never heard of her. So I looked her up and learned that Boaler is a professor at Stanford, and an expert on the teaching of mathematics. Her work in that field has been both influential and controversial. Boaler argues that any child can become proficient at maths, given time, if they believe in themselves and in their ability to improve. Children should not be told that they have fixed traits such as 'clever' or 'bad at math', but rather they should be given a 'growth mindset'. This is a mindset in which they see ability as learnable, and they see mistakes as chances to learn. I'm no maths teacher, but Boaler's ideas seem reasonable to me. We do learn from our mistakes, or at least we can do. On the other hand, I found some of Boaler's claims about the brain to be problematic. For instance, on her website, youcubed.com, "Brain Science" features prominently here, but not always accurately, in my opinion. 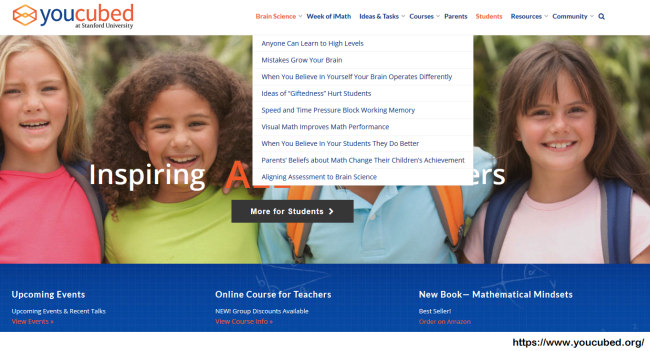 In an article called 'Mistakes Grow Your Brain', Boaler says that

Psychologist Jason Moser studied the neural mechanisms that operate in people’s brains when they make mistakes (Moser et al., 2011). Moser and his group found something fascinating. When we make a mistake, synapses fire. A synapse is an electrical signal that moves between parts of the brain when learning occurs... [this] is hugely important for math teachers and parents, as it tells us that making a mistake is a very good thing. Mistakes are not only opportunities for learning, as students consider the mistakes, but also times when our brains grow.

The study Boaler's referring to here was published in 2011 in Psychological Science by Moser et al. of Michigan State University. Boaler refers to this paper in other places as well as this article. But as far as I can see, she is misunderstanding it. Moser et al. used EEG to measure electrical activity in the brain of college students during performance of a simple button-pressing task (nothing to do with mathematics.) It's known that after making an incorrect response, the brain responds with a negative voltage wave, the error-related negativity (ERN), followed by a positive wave, the error-related positivity (Pe). Together these are called the event-related potential (ERP). Moser et al. found that students with a 'growth mindset' showed a larger Pe compared to those with a 'fixed mindset'. Note that on these graphs, negative is up and positive is down:

Boaler's right that ERPs are a product of coordinated synaptic activity. However, there's no reason to assume that they reflect 'brain growth'. Synapses are how neurons communicate with each other. They convey messages at very high speeds. An ERP could be said to reflect information processing. Learning however is a different, slower, process in which new synapses are formed, and existing ones are remodelled and strenghened. EEG can't measure this process. Meanwhile, on another youcubed page, Boaler says that Moser et al.'s data mean that

If you believe in yourself, and do not think that your ability is fixed, your brain is more likely to spark and grow when mistakes are made.

Moser et al. did find a larger Pe in those with a 'growth mindset', but this doesn't establish that the mindset was the cause of the larger Pe. It might be, on the contrary, that people who tend to consciously note their own mistakes are more likely to adopt a growth mindset.

Another neuroscience case that Boaler discusses is Cameron Mott, who had a hemispherectomy (removal of the entire left hemisphere of the brain) at age 9, to treat epilepsy. As Boaler tells it,

Doctors expected her to be disabled for many years, as the left side of the brain controls physical movements. But as weeks and months passed, she stunned doctors by recovering function and movement that could mean only one thing - the right side of her brain was developing the connections it needed to perform the functions of the left side of the brain. Doctors attributed this to the incredible plasticity of the brain and could only conclude that the brain had, in effect, “regrown.”

The moral of Mott's story being:

Such results should prompt educators to abandon the traditional fixed ideas of the brain and learning that currently fill schools—ideas that children are smart or dumb, quick or slow

It's true that neuroplasticity is a remarkable phenomenon, especially in children. However, there are limits toneuroplasticity: there are plenty of cases in which children receive a brain injury early in life, or even in the womb, and never make a full recovery. These cases show that the brain is not entirely plastic.

I'm not criticizing Boaler's educational ideas, and I certainly don't take a side in the US 'math wars

' which apparently forms the context for the debate over Boaler and her work. But in my view her use of neuroscience is misguided. Neuroscience is nowhere near advanced enough to tell us that a certain teaching approach is better than another. Children doing well in maths is a behaviour, and if we want to find the best way to modify a behaviour, neuroscience is no substitute for studying that behaviour. In this case, we could try randomized controlled trials of different approaches to teaching. This will tell us more than any amount of EEG data.