Your Brain Is Bigger In The Morning

The brain shrinks over the course of the day, ending up smaller in the evening - before returning to its full size the next morning. That's according to a neat new study based on an analysis of almost 10,000 MRI scans. It's

. Kunio Nakamura and colleagues of the Montreal Neurological Institute examined 3,269 scans from multiple sclerosis trials and 6,114 from the ADNI Alzheimer's disease project. This makes it the biggest neuroscience study I can think of. The authors show that people's brains are bigger when they're scanned in the morning, compared to afternoon or evening scans of the same people. Nakamura et al. defined brain size in terms of the brain parenchymal fraction (BPF), which is the proportion of the intracranial volume that's filled with brain tissue. Essentially, the BPF is the degree to which your skull is full of brain. The BPF fell by 0.18% over the course of the day in the multiple sclerosis studies, and by 0.44% in the Alzheimer's dataset. Not a huge amount, but to put this in context, it's roughly the same degree of shrinkage that someone with Alzheimer's would experience over the course of a year. Here's an image showing BPF by time of day (8 is 8 AM, 18 is 6 PM) in the ADNI dataset: 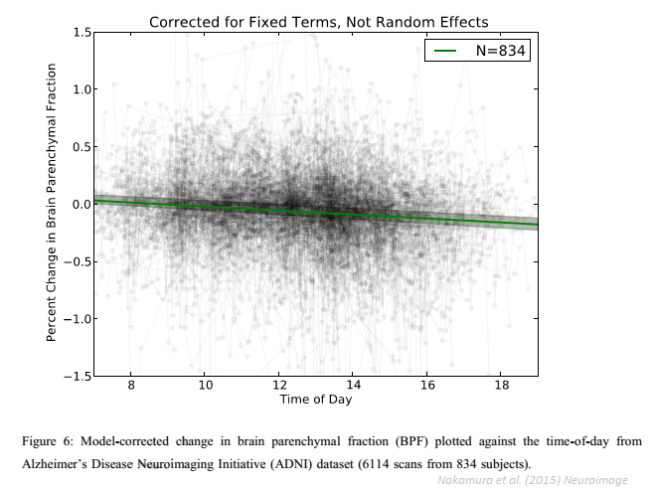 Why does the brain shrink as the day goes on? Nakamura et al. suggest that fluids may be the key. Like a sponge, the brain gets bigger when it's well hydrated:

The authors warn neuroscientists to control for time-of-day effects in future studies:

Our study suggests that a bias related to the acquisition time exists, and this may be especially apparent in small studies where the time of image acquisition may not be fully random. For example, a tendency to acquire MRIs from healthy subjects in the morning and the diseased group in the afternoon would bias the brain volumes towards a greater group difference in cross-sectional studies.

Neuroskeptic readers may remember that I made the same point a while back, after a paper showed changes in the functional properties of the brain as the day progresses.