Your Bad Day Is Probably Stressing Out Your Pup, Too

Your stress may be contagious to your dog. 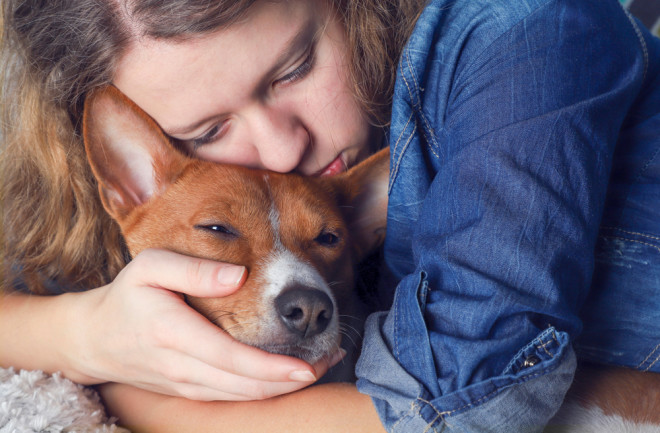 A knowing glance. A paw on your arm. A lick on the cheek. Most dog owners can recall a time when they were feeling down. And somehow, their dog just knew something was wrong and responded with a loving gesture.

Many dog lovers have long believed that canines are able to sense human emotions. And, a growing body of evidence on the emotional connection between man and his best friend adds weight to these heartwarming anecdotes from owners. But new research suggests that dog intuition may run deeper than we previously thought.  A study, published in Nature Scientific Reports this week, found that dog owners experiencing chronic stress can transfer it to their dogs. The researchers tracked the concentration of cortisol, a marker for stress, in dog owners and their pooches. They found that patterns of cortisol in dogs and owners closely matched over time, indicating that levels of the stress hormone became synchronized.

Study co-author Lina Roth, a behavioral biologist at Linköping University in Sweden, explained that previous studies have found that short-term stress can be “contagious” between members of different species. But she said this study is the first to demonstrate something something similar with long-term stress.

In this new study, researchers tracked the stress hormone levels of 33 Shetland sheepdogs and 25 border collies and their female owners (they couldn’t find enough men interested in participating) over the course of a year. Using hair samples, researchers found that people and their furry companions got stressed at about the same times. This was most apparent among female dogs, which the researchers say might be more attuned to their owner’s emotions.

Digging deeper into the results, the researchers looked at how different lifestyle and personality factors might be stress-provoking for dogs. Surprisingly, they didn’t find that dog personality, training or exercise had a strong effect on canine cortisol levels.

While it might sound counterintuitive, researchers found that owners who ranked high in openness and conscientiousness tended to have dogs with elevated levels of the stress hormones.

Owner neuroticism, on the other hand, was associated with lower concentrations of the stress hormone in dogs. While living with a “neurotic owner” might sound stressful, researchers think this human trait may play a positive role in regulating canine cortisol levels. Neurotic owners may form stronger bonds with their pups and look to them for emotional support. This, in turn, may help both dog and human stress levels, researchers say.

Why cortisol levels between owners and their dogs become synced is still unclear. But Roth thinks the answer may lie in the training and bonding that most owners go through with their dogs. She cites the elevated cortisol levels in dogs trained for competitions as an example.

“It could be the interaction and the training between competing dogs and their owners that increases the emotional closeness and generates the stronger long-term stress synchronization,” Roth said in an email.

Simply put, the closer you are to your dog, the more likely it may be to pick up on your stress. That may also depend on dog breed, as well, though, so Roth and her colleagues plan to study cortisol levels in hunting dogs next, which are trained to be more independent.