Yet more twists have emerged in the already serpentine tale of XMRV, the virus that may or may not be responsible for causing some cases of chronic fatigue syndrome (CFS), aka myalgic encephalomyelitis, (ME). 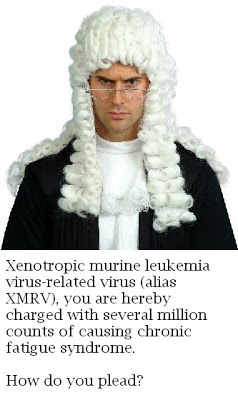 First off, on Saturday 2nd July, a news item in Science magazine reported that two papers on XMRV were about to be published, but that the publication of both was "on hold" because they contradicted each other. One paper, from the US federal Centers for Disease Control (CDC), supposedly found no evidence of XMRV infection while the other one, from the National Institutes of Health and Food and Drug Administration (NIH/FDA), did.

The papers were only rumored to exist at that stage, and the story behind the NIH/FDA paper was particularly complicated. A Dutch magazine called ORTHO reported(see also) that NIH virologist Harvey Alter had given a presentation in Zagreb, Croatia, in which he reportedly said that the original Lombardi et al 2009 results, which first implicated XMRV in CFS

are^ extremely strong and likely true, despite the controversy...We (FDA & NIH) have independently^ confirmed the Lombardi group findings.

This was in reference to the still unpublished NIH/FDA paper, which according to Science, has been accepted for publication but currently put "on hold" by the journal PNAS.

However, the Science news was obsolete as soon as it appeared, because the other "on hold" paper, the negative one from the CDC, turned out not to be on hold for very long, if at all. It's now available online at the journal Retrovirology: Switzer et al's Absence of evidence of Xenotropic Murine Leukemia Virus-related virus infection in persons with Chronic Fatigue Syndrome and healthy controls in the United States. It's listed as being published on the 1st July.

The CDC paper Switzer et al, as the rumors predicted, is negative. The authors tested blood plasma from 51 CFS cases and 53 healthy controls and found no evidence of anti-XMRV antibodies; they sent the same samples to a German lab and they confirmed the results. They then tested DNA extracted from blood samples in the same CFS patients and 97 controls, finding no evidence of XMRV DNA using a number of analytical methods; again, a second lab confirmed this. The paper is open access, so you can read it for more details (there are lots).

This is a big deal, because this is the first paper to attempt to replicate Lombardi et al's results in American patients. Several studies have appeared in the months following the original paper, and none of them found XMRV infection in any of their patients or controls. This is mysterious because Lombardi et al found XMRV in 67% of patients, but also in 4% of controls. However, these studies all used European people, raising the possibility that XMRV is just not found in Europe, for whatever reason.

So what exactly is going on here? Maybe only Lombardi et al used the appropriate methods which were able to detect XMRV, and everyone else has been failing to pick it up. However, in my opinion, while this was a reasonable suspicion months ago, it's very unlikely now because (by my count) 6 labs have not found XMRV in CFS patients, using lots of different approaches.

There's another possibility - maybe only Lombardi et al were studying the right people. Lombardi et al used a carefully selected subgroup of CFS patients with various neurological and immunological abnormalities suggestive of a "medical" as opposed to a "psychological" disorder. However, the most popular 1994 criteria for CFS are a lot broader than this. Supporters of the XMRV-CFS link say thatXMRV is probably associated only with some cases of CFS, and the various failed attempts to confirm XMRV have been looking in the wrong people.

Bearing this in mind, it's notable that the latest Switzer et al paper didn't recruit patients by approaching those who considered themselves to have CFS. Rather they identified cases through population screening: calling random numbers from the telephone directory of Wichita, Kansas, and of sites in Georgia, and asking people whether they were suffering from CFS-like symptoms such as fatigue. People who answered "yes" to enough questions were invited for a medical exam and interview and were diagnosed with CFS if they met the 1994 criteria (though in the abstract these are described as the revised 1994 criteria), as long as their symptoms weren't explained by a known, current medical or psychiatric disorder.

It's fair to say that this will have recruited a very different cross-section of patients than Lombardi et al did. However, in my opinion, while this is important, it doesn't resolve the fundamental mystery of why no-one had XMRV, not even the healthy controls, given that Lombardi et al found XMRV in 4% of healthy people. To my knowledge, this question remains unexplained. Maybe the "on hold" NIH/FDA paper will shed some light...

Finally, those interested in this topic may find my running summary of (I hope) all human XMRV research useful.

Link: virologyblog is also on thecase...