Would Space Plants Be Called "Botanauts"? 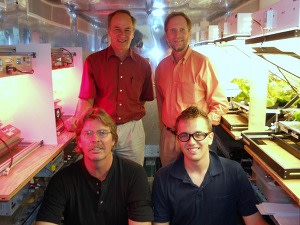 The Veggie team at Desert RATS Creating a space farm is a such a common assumption that SciFi writers almost routinely include some kind of plant growth or space farm area in any show that involves long distance space travel or space-based colonies. Off the top of my head, I can think of an episode of Doctor Who, and the film Sunshine, and the New Yorker story Lostronaut. But growing plants is hardly straightforward. Indeed, straightness is one of the problems: Plants rely on both light or gravity to orient themselves, so their roots grow down and their stems grow up. But then there's the problem of providing the right levels of humidity, ensuring the water actually goes down to the roots in a zero-G environment, providing enough nutrients, and doing it all in a space- and energy-efficient way. To solve the problems of growing plants in space, Orbital Technologies Corporation has been working on "deployable vegetable production units" or, as they're more affectionately called, Veggies. The latest iteration was based on astronaut food containers, and offers astronauts a way to grow plants as a hobby during their free time, as well as give NASA a chance to experiment on the problems of growing plants in microgravity. Each Veggie unit is a box offering 0.13 square meters of growing area (about 1.4 square feet). Astronauts inject water into a foam base with a hypodermic needle, and light is provided by multi-colored LEDs from above. The boxes can grow small herbs or other plants that can supplement astronauts food supply. 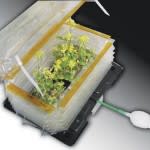 they expect the units to get a test run on the International Space Station sometime soon. NASA may even try putting some of the units into a centrifuge to test out different levels of microgravity and its effect on growing time. The company also makes their Space Gardens

for schools, which is actually pretty cool if you're a kid. Though seems to me anyone who's a Square Foot Gardner

is already halfway toward space farming.