With the Flip of a Switch, These Mice Attack 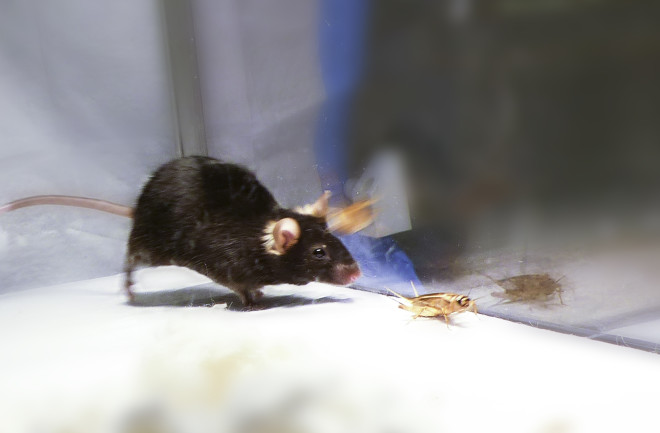 (Credit: Wenfei Han et. al/Cell) With a flash of light, researchers have induced mice to pounce on anything in their line of sight. Researchers from Yale University and the University of São Paulo isolated the regions of the mouse brain that control both hunting and biting, and say they can activate the neurons involved on command. The research should help illuminate another small part of the neural pathways that connect the outside world to our internal computations.

Between the Action and the Reaction

In this case, the researchers were interested in the link between an outside stimulus — like seeing a delicious cricket — and an action, such as pouncing on said cricket. Their research, published Thursday in Cell, looks at the second part of that question. The researchers used a technique called optogenetics to empirically test the findings of a previous paper that described mouse brain regions involved in predatory behavior. They implanted genetic material from light-sensitive algae into neurons that control hunting and biting, and used flashes of laser light to stimulate them. The results were convincing: When target regions were activated, the mice pounced without a second thought, following their predatory instincts. When the laser turned off, the mice returned to normal behavior. And the mice didn't limit their attacks to prey: When the kill switch was activated, they attacked sticks and bottle caps as well. The researchers tested two separate regions involved in hunting, one linked with pursuing prey and another linked with biting. The neurons involved in pursuing prey are located in the ventral amygdala, a region connected to the hypothalamus, where neurons for biting behaviors are found. Both regions were in turn connected to parts of the mouse brain known to control muscles in the jaw and face. When researchers damaged neurons that controlled biting, the mice stopped using their jaws as much and were unable to deliver a killing blow to prey. "Predatory behavior is a very good model because it is something you can get animals to do, you don't need extensive training," says Ivan de Araujo, an associate professor of psychiatry at Yale and a co-author of the paper. "What is interesting about predatory behavior is that it is not just one type of movement, it involves locomotors and craniofacial movements." In other words, the researchers had moved a step beyond the discrete set of movements involved in hunting. Instead of looking at neurons that controlled individual motions like moving the head and lifting the paws, they found a region that corralled all of these neurons into a single task. This takes them one step closer to their ultimate goal: Determining how sensory inputs translate into actions.

How Decisions Are Made

Scientists have identified regions of the brain that receive information from sensory organs, along with the parts of the brain responsible for moving limbs. What's unclear is how the two regions are connected, and scientists like de Aruajo want to map the neural pathway that links sight and action. "It helps us understand how the brain operates on a large scale," says de Araujo. "How neurons recruit different areas to perform one coherent task." And, to counter those who may fear sociopathic mice, de Araujo says that their mice are far from bloodthirsty killers. They may have found a way to get mice to pounce, but the regions they activated were responsible for a very specific set of actions. "I believe this is something that is ... highly specialized in looking for food, looking for nutrition … as opposed to a uncontrolled killer instinct," says de Araujo. He points to the fact that none of the optogenetically-controlled mice attacked their cage mates as evidence. De Araujo and his team have found the locus of hunting activity, but the challenge now is to find what part of the brain controls that decision-making. And, diving deeper, how decisions emerge in the first place. Eventually, he hopes that this path will lead him out the other end, to the initial stimulus, and link all of these disparate events into a single cascade of neural activity. Only then will we be able to draw a clear line between action and reaction.