Why You Can't Resist the Office Doughnuts

To lose that extra weight, think less about food and more about environment.

One pound a week.

It’s a common weight-loss goal thought by experts to be reasonable. By that reckoning, I should have lost 780 pounds in the 15 years I tried to lose weight. But I didn’t. Instead, I lost a paltry 25 — an inglorious rate of a half-ounce per week.

Working from home, I’d be out of reach of the doughnuts in the conference room or the jar of mini Snickers on my colleague’s desk. I figured that might make it easier to lose weight. And it did.

Turns out there’s a body of research on just that subject — the siren song of food — and I’m not alone in my inability to navigate temptation successfully. One 2011 study of college-age women found that overweight participants tended not to overeat when they weren’t actively tempted. However, according to the study’s authors, “the probability of overeating … increased rapidly as the number of good-tasting high-calorie foods increased.” Don’t I know it.

So what makes some of us all but powerless in the presence of a cruller?

A Slave to the Systems

Hedy Kober, who runs Yale University’s Clinical and Affective Neuroscience Lab and co-authored a 2016 research review on how we respond to food, sums it up: “Food cues. They make you eat more.” Those cues run the gamut. There’s the sight of food, the smell of it, even just a picture of it — they all make us want it. Just like the classic example of dogs drooling at the ring of a dinnertime bell, it’s out-and-out Pavlovian — a conditioned response to a stimulus. If Ivan Pavlov himself rose from the dead to check our salivary glands as we walk past a Cinnabon, there’d be no surprises.

I’m not sure we humans like to think of ourselves as inhabiting the same evolutionary plane as slobbering dogs, but we’re not so different. Just like them, yes, we need food, but we also like it. And that’s what makes food so tempting. “It’s true in your life, it’s true in my life, and it has a neurobiological explanation,” Kober says.

Two different systems in the brain govern our food decisions. Our homeostatic system regulates our need for food and is controlled mainly in the hypothalamus (in the lower region of the brain). It regulates hormones that make us feel hungry or full and responds primarily to internal signals about our energy balance.

The other — our hedonic reward system — is all about the liking. It’s complex and involves many parts of the brain, and it’s not even close to completely understood. But research has clearly shown that it makes us want to eat, even when we’re not hungry. The two systems aren’t completely separate, and hunger can amp up our hedonic reward system. Yet no amount of satisfying that hunger will shut it down.

I’ve been there. I remember afternoon meetings when there was no earthly reason I should be hungry, staring down the damn cruller. The meetings were long. I stood no chance. I am Pavlov’s dog. We’re all Pavlov’s dogs.

Or maybe we’re Pavlov’s secretaries. One workplace study, done about a decade ago, involved 40 secretaries and jars of candy. Researchers put candy jars, some clear and some opaque, either right on the secretaries’ desks or about 6 feet away. When clear jars were on the desk, the participants ate an average of 7.7 candies. When the jars were opaque, or far away, they ate fewer. But when the jars were both opaque and out of reach, consumption dropped 60 percent.

A 60 percent drop, just by rejiggering the jar. Out of sight, out of reach, out of mind. 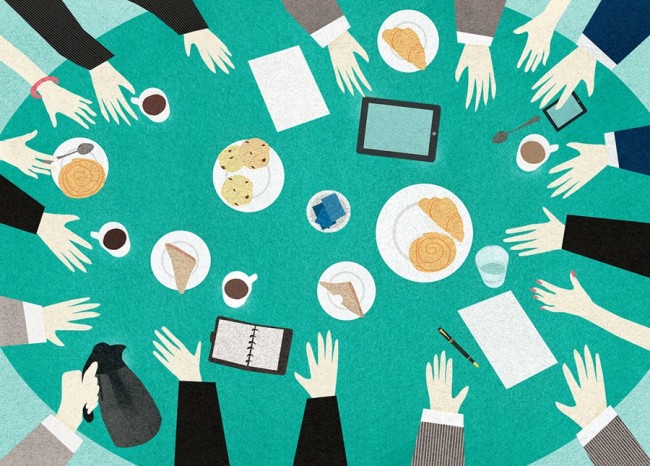 A 2016 study published in the journal Appetite looked at this concept as well, but in Google’s millennial-friendly workplace where food and drink are available at any time. Before collecting data, the researchers saw that most people who came into the break room took a drink. So in half the break rooms, they put snacks next to the drinks. In the other half, the snacks were farther away. When the food was alongside the drinks, twice as many men and one-third more women helped themselves to the treats.

Even when food is right in front of you, other cues also matter. You know that chocolate-chip-cookie smell? In one 2008 study, people trying to eat less actually ate 50 percent more cookies in the presence of the scent.

Who decides whether — or how — we should limit exposure to food cues like advertising?

Which brings up an important caveat. Some of us, myself included, are more susceptible to food cues than others. And there’s good evidence that heightened responses to those cues can predict whether we put on a few pounds. In one 2015 study, researchers gave adolescents chocolate milkshakes and used fMRI scans to see how their brains reacted. “Elevated” responses — those that indicated a higher affinity for chocolate milkshakes — predicted fat gain three years later.

But it’s not limited to just teens and milkshakes. Over and over, neuroimaging studies find correlations between patterns of response to food cues and BMI or weight gain.

So where do we go from here? Maybe we manipulate those food cues — not just our diets — to try and make a dent in our obesity epidemic.

A head-slappingly simple way to tackle the issue? “Changing your environment is one potent solution,” Kober says.

Boy, have I changed mine. Step into my kitchen, and all you’ll find are ingredients. No pastries, no crackers and absolutely no crullers. On those rare occasions when I do have dangerous foods in the house — you can’t say no when your neighbor is selling Girl Scout cookies — I’ve been known to ask my husband to hide them and bring them out in limited quantities when my back is turned. It’s embarrassing, but it works. (Except when I find the forgotten sleeve of Thin Mints, months later, in the file drawer with the taxes.)

Once you step outside the domain where you have control, though, it gets more complicated. It’s not a coincidence that the barbecue joint has a smoker going, or that the grocery store gives out samples, or that there’s an entire profession — food styling — dedicated to making food look delicious in pictures. So who decides whether — or how — we should limit exposure to food cues like advertising? Kober believes these are the kinds of hard questions we should be asking.

Despite the temptations out in the world, in the nearly 20 years since I’ve had a J-O-B, I’ve kept the weight off — but it’s been a fight. So if you see me, do me a favor. Hide the jar.

[This article originally appeared in print as "Siren Song of Food."]