Why We Snap: From Road Rage to Barroom Brawls 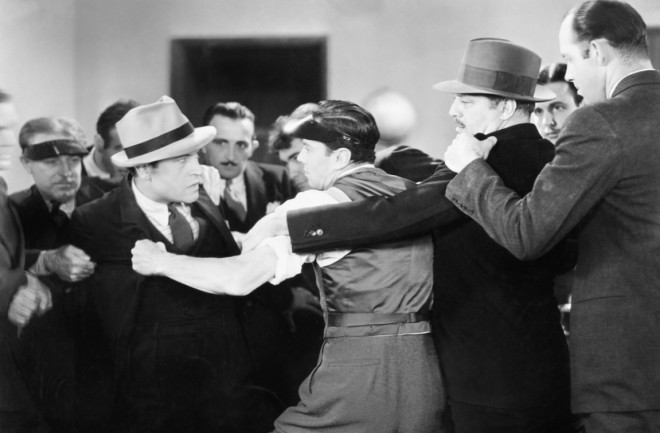 In LIFEMORTS, the “I” stands for the “Insult” trigger, which can easily provoke rage.

R. Douglas Fields, a neurobiologist in his 50s, won’t hesitate to lock a pickpocket into a deadly chokehold in the middle of the street. He’s done it before.

Fields isn’t a badass, crime-fighting martial artist whose cover is his day job in the lab — he’s just like everyone else. But when his wallet was snatched while traveling in Barcelona with his 17-year-old daughter in 2010, you could say he just, well, snapped. He didn’t have time to think. He jumped into action.

He got his wallet back.

That incident in Spain stuck with Fields, and it inspired his new book, Why We Snap: Understanding the Rage Circuit in Your Brain. Fields is a senior investigator at the National Institutes of Health in Maryland and the editor-in-chief of Neuron Glia Biology. He set out to understand the rage circuit and examined the latest research into human aggression.

Most violent behavior, Fields discovered, results from a clash between our evolutionary hardwiring and our modern world. To put it bluntly: Our rage circuit wasn’t designed for daily commutes on crowded highways or the deluge of social media affecting our relationships. Through his research, Fields outlines the nine primary triggers of the human rage circuit and puts them into the handy mnemonic LIFEMORTS: Life-or-death situation, Insult, Family, Environment, Mate, Order in society, Resources, Tribe and Stopped (being restrained or cornered).

Discover spoke with Fields about his investigation, and it turns out that our rage response is a complex double-edged sword that helps us and hurts us.

Discover: Snapping, or flipping out, is commonly seen as a negative response to a given situation. But in the book, you present a more agnostic view of this response. It’s both good — it’s essential for our survival — and bad. Can you explain the mechanisms that cause us to snap, and why they are both good and bad for us?

Fields: We call it snapping only when the outcome is inappropriate. But if you look inside the brain and look at the mechanisms that have been activated, it’s the same process that’s vital to responding quickly to any threatening situation. This mechanism isn’t in the cerebral cortex, it’s not conscious, because cortical thinking is too slow in a sudden, dangerous situation.

It involves neurocircuits of threat detection and sudden aggression. We need these circuits; we wouldn’t have them if we didn’t need them. That’s the double-edged sword of snapping.

What are the basic triggers for why we snap, and how did you narrow the myriad triggers that set people off into nine categories?

F: It seems like anything can set off this response, but I took a different approach. Rather than taking a psychological approach, I took a neuroscience approach. I decided to look at the neural circuits in the brain that produce sudden aggression. What new research is showing is that there are different circuits for different kinds of triggers for sudden aggression. Of course, scientists use different names for these neural circuits, but much of communicating to the public is getting over the jargon.

For the purposes of communicating — but more importantly, for the purposes of understanding and controlling the aggressive snap responses — it was necessary to identify the triggers very quickly. I’ve taken these circuits of sudden aggression in the brain and separated them into nine triggers. I came up with the mnemonic LIFEMORTS because it’s chunked into your memory as life/death.

For example, what scientists would call maternal aggression, in LIFEMORTS that becomes “F” for “Family.” That’s how I did it, and that’s what’s unique. It’s based not on the behavior, but on the new neuroscience tracing out these circuits in the brain.

These are all independent circuits. In the past, people thought rage or fear all came from one part of the brain, and that’s just overly simplistic.

One of the most fascinating revelations from the book was the amount of information our brains process subconsciously. Can you talk a little about the work our brains are doing without our knowledge?

Your amygdala gets sensory input from every one of your senses through a high-speed pathway reaching the threat-detection mechanism before it even goes to the cortex, where we have conscious awareness. That’s because your unconscious brain is surveying the world for threats. When it calculates that we’re in danger, it communicates that to the cortex with emotions like fear, anger or anxiety.

In general, people do not appreciate how much the brain is doing below the level of consciousness. You may not be able to put your finger on what’s wrong; If you suddenly just don’t feel right, you back off. Your brain is taking in enormous amounts of information and calculated there’s something wrong.

How do our genes dictate the way we’ll respond to danger, or the sight of other people in danger?

F: Genes are a big part of it, as in everything in biology. It’s a mixture of genes, environment and chance. Different people will respond differently to the same situation. The genetic factors are those that affect this network of threat detection in the brain, which, by the way, spans from the frontal lobes all the way to the hypothalamus — it’s not a lizard brain.

We know many of these genes, and they are genes that affect the circuitry and production neurotransmitters like, for example, dopamine. That’s part of the reason why different people will have different reactions to the same threat.

How much of this can we actually control? Can we contain or channel our snaps to either stifle them in difficult situations, or direct that energy in a positive way? Is awareness of the triggers enough, or are we simply hostages to the hormones and firing synapses in our brains?

F: Most of the time, this mechanism works amazingly well. When we start talking about controlling the mechanism, we are talking about trying to prevent the misfires. Yes, I think that you can control it.

In fact, I’ve interviewed elite athletes, Secret Service agents and members of SEAL Team 6, and they control it. They have to. Understanding the mechanism helps to control it, but being able to identify why you are suddenly angry allows you then to disarm this response when it’s inappropriate.

Where does road rage fit into LIFEMORTS?

It turns out that road rage hits on all nine of them — little wonder. It’s a great one because we’re all familiar with rage on the highway, and it’s so bewildering.

These circuits in our brain evolved in our brain for a different world, a different time. In the modern world, many of these defensive triggers get tripped — inappropriately — by conditions that didn’t exist before. Driving is just full of them.

When somebody cuts in front of you, you suddenly find yourself overwhelmed with anger. But why? It really doesn’t make sense. If the purpose of driving is getting somewhere safely, a person in front of you or behind you will only make a few seconds’ difference. If you’re running in a field during a foot race and someone cuts in front of you, it wouldn’t evoke the same kind of anger, and you might even laugh. There’s something peculiar about the act of driving that causes this sudden anger.

One of the LIFEMORTS triggers is “E” for “Environment,” and that is to protect your home and property. Many mammals have this, and certainly humans do. It’s fundamental to our biology. When somebody cuts in front of you, we perceive that space in front of our car as our property. That trips this trigger that is designed to elicit sudden aggression to get into a physical battle with an intruder in your property. Once you can recognize why you are angry, rather than suppress it, suddenly it goes away. Suddenly it’s disarmed. It’s a misfire.

A: Every day we read about violence, murder and mayhem not caused by people who are mentally ill. It’s people who suddenly snap in rage, and in many cases — domestic disputes or barroom brawls — the person ends up snapping and murdering a person they are close to, even a loved one.

When I read about snapping in the newspaper, it’s left as a mystery because we don’t understand the backstory. There’s always a reason in these instances, and that information doesn’t get into the news story.

We all have the capability for violence. It’s wired into our brain over the struggle of evolution. We need it for protection. We needed it to kill animals. It doesn’t need to be taught. Unfortunately, it can be triggered inappropriately. One thing that is always behind this is a chronic stress that isn’t understood. Stress puts these triggers for violence on edge.

With 2016 being an election year, I have to ask: Do politicians, to a certain extent, manipulate the LIFEMORTS triggers for their benefit?

F: Two that we are seeing are the “Tribe” trigger and the “Environment” trigger. The “Tribe” trigger is that human beings will separate into groups, us versus them, and they will use violence to maintain those groups. In early times, strangers, or a strange group, was a threat. A lot of what we see going on in talks about refugees and how to handle borders are all examples of the “E” and “T” trigger.

You can define “us and them” in many terms, and we have to be careful in how we are manipulated into defining “them.” In any election, we should be aware when politicians are pushing on these triggers. The hopeful side is that these triggers will also unite us. When we saw that picture of the refugee whose family had been killed and washed up on the beach, everything changed. When we saw that man in the picture, we saw ourselves. We saw that he was part of our tribe. He may be a Syrian, but he was a father, a family man. He was us.