Since ancient times, communities have circulated tales of nearby spirits that are attached to specific spaces and carry memorable moral lessons. Often, they serve to spread practical warnings. 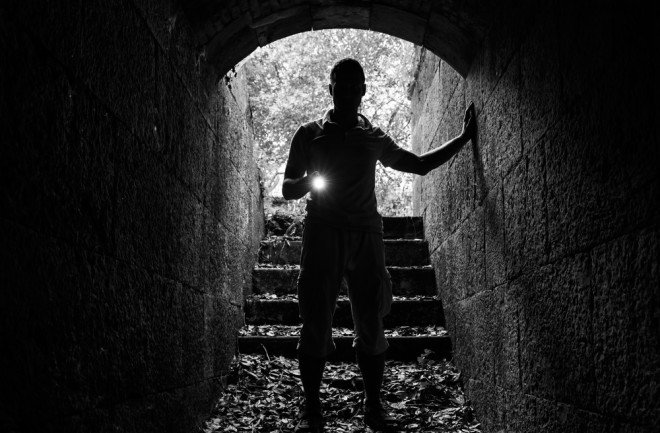 Drivers cruising down Archer Avenue, a road located just southwest of Chicago, have long reported sightings of a young, blond woman wearing a white dress. She seems out of place on the dark road, and drivers often feel compelled to offer her a ride home. They say she’s a quiet passenger — that is, until the car approaches the gates of Resurrection Cemetery.

In some versions, the young woman asks the driver to pull over. In other accounts, she simply vanishes. Either way, the unnerved driver learns the lovely passenger was not a lost hitchhiker, but rather a ghost.

Locals call her “Resurrection Mary” and her chilling story has endured for decades. Some say she was a young woman who died in the 1930s in an auto accident and was buried in the cemetery wearing a white party dress. Others believe Mary attended a dance at a nearby ballroom in the 1920s and got into an argument with her boyfriend. She supposedly left in a huff and began walking down Archer Avenue, where she was struck by a car.

Mary’s legend has been the subject of various news articles, ghost tours and books. Like other urban legends, Resurrection Mary represents a community ghost tied to a public space rather than a private residence or business. Throughout history, community ghosts have been known to haunt forests, highways or parks. Anyone can access these spaces and insert themselves into the story — one reason why folklorists say these stories start, spread and endure for decades.

Folklore scholars classify stories like Resurrection Mary within a vanishing hitchhiker narrative. The narrative has existed for hundreds of years and evolved as transportation modernized.

“In Medieval times, there were stories of saints asking for transportation or asking to join a group of travelers,” says Elizabeth Tucker, an English professor at the SUNY Binghamton and author of Legend Tripping, which explores the practice of site visits associated with specific legends.

Narratives such as the vanishing hitchhiker gain popularity when they’re attached to an accessible location, says Jeannie Thomas, an English professor at Utah State University. Her book Putting the Supernatural in its Place considers how people find the supernatural in the modern world. “Visibility has a lot to do with creating legends,” Thomas says.

Public places like roads, parks and forest preserves allow anyone to hear the story and then see the phenomenon for themselves, an act folklorists refer to as “legend tripping.”

This is particularly appealing because people can directly engage with the legend. Binghamton also claims a vanishing hitchhiker, who is described as a Victorian woman who wears white. Tucker says some of her students have admitted to buying old-fashioned white dresses and displaying them near the road in hopes of convincing others they have spotted the ghost.

But most of us no longer have to drive along a haunted road and look for a white dress in order to engage with legends. Nowadays, technology makes it even easier for ghost stories to spread and persist without trekking to the location yourself. Tucker says a ghost story’s reach is called a “legend cycle,” and stories that resonate with cultural fears have the ability to spread.

Community ghosts often reflect fears and provide warnings. These stories often come with a moral, especially for young people, says Daniel Compora, an English professor at the University of Toledo who studies fear and folklore.

Compora gives the example of Dog Lady Island near Monroe, Michigan. He says the inlet is the sort of remote place that attracts teenage gatherings. According to the legend, the Dog Lady will jump on intruders’ cars to scare them away. Depending who you ask, the Dog Lady was a woman who faced a dog attack that disfigured her, or she owned guard dogs as protection from a motorcycle gang.

“It was a typical boogie man, a typical cautionary tale. She jumped on your car and scared you away. You had to stay away from the island," Compora says. "A lot of legends are started to keep people away from things."

Similarly, many universities have a ghost story attached to a dorm or campus building that provides a cautionary tale of a stressed-out student who took their own life due to academic pressure, Tucker says. “It’s very common,” Tucker says. “That kind of story is told all over college campuses all over the country. These are the legends that say, ‘Better watch out.’”

Community ghosts are more likely to stick around in our imaginations if they incorporate a visible marker. Thomas gives the example of the weeping woman statue in Utah’s Logan City Cemetery, which some locals say actually weeps. According to legend, a mother lost five children to scarlet fever in the early 20th century and sometime after passed away  from a heart condition. Believers say the statue weeps on the anniversary of the children’s deaths. The story will likely endure as long as the statue serves as a clear, visible reminder, Thomas says.

The loss of a given location can end the cycle, which means the ghost children of the San Antonio railroad tracks might soon slip from public memory. This story claims that a train hit a school bus stalled on the tracks and ten children aboard died. For decades, legend trippers visited the tracks, shifted their cars into neutral, and insisted they felt the children’s ghosts push the car over the track and into safety. Visitors have also sprinkled flour on their car trunks to see if the ghost children’s fingerprints might materialize.

Thomas says the car rolling over the train tracks can probably be explained by an optical illusion. The tracks were actually on a slight decline and this movement resulted from a gravitational pull, not tiny little ghost hands.

The popular legend, however, is likely to die out. In 2018, a railroad company altered the crossing, partly due to concern that people were idling on the tracks, or even stopping there completely, to connect with the infamous spirits.